The Muscle in Question 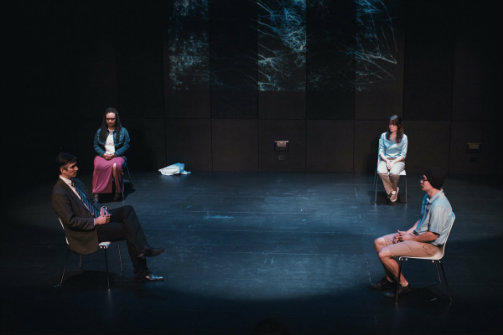 BOTTOM LINE: A neurologist and his teenage daughter grapple with love and loss.

Though billed as a play about “how the technical structure of a human’s brain has an effect on their day to day well-being, experiences and existence,” The Muscle in Question is in actuality a story about love and loss that uses vague conceptions of neurology and psychiatry as backdrops. The play centers on a neurologist, Peter (Denny Desmarais), and his teenage daughter Violet (Danielle Boivin) as they contend with their relationship and with the terminal brain diseases of loved ones past and present.

The story has minor science fictional overtones and contains a couple of intriguing magical elements. It’s a pity that these exciting fantastical aspects of the show are passed over so quickly. Overall, the plot is impressively intricate. Unfortunately, this leaves the play feeling unfocused and overlong; a tighter arc might have allowed for deeper emotional investment. In the same vein, the sheer number of characters who are revealed to suffer from serious illnesses (five in total, three of whom are not seen onstage) reduces the potential impact of such revelations.

The play raises, but does not truly engage with, interesting questions about bioethics and the distinctions between brain and self. It focuses instead on the universal themes of romance, family, sickness, and death. These are engrossing topics, and it is a credit to playwright Samantha Stone that she tackles them. The Muscle in Question is chock-full of heartfelt speeches and heated arguments about serious, tragic subjects. But because we are not given a chance to know the characters before they must confront matters of life and death, the dialogue doesn't always feel earned. The paucity of character development is especially apparent with the sick characters, who are portrayed less as complex human beings, and more as tools to teach the healthy characters lessons. As a result, the play lacks the profundity that it seems to be aiming for. Instead, it hits the audience over the head with ideas that might have worked better as subtext.

Luckily, the staging, set, and costume design are understated, which helps mitigate this somewhat. Additionally, the acting is solid overall. And as Violet, Boivin stands out, bringing genuine emotion to lines that might otherwise come across as melodramatic.

The play in question, so to speak, is reminiscent of novels by John Green and Nicholas Sparks—it is perhaps the theatrical version of this kind of “sick lit.” As such, it might be best-suited for teenagers and other fans of this emerging genre. An accessible, ambitious play from a team largely comprised of recent college graduates, The Muscle in Question may have enough drama for the whole festival, but ultimately falls short of saying something new about its compelling subject matter.