The Illusory Adventures of a Dreamer

By Michael Bradley; Directed by Chris Goodrich
Produced by the Rhapsody Collective
Part of the 2016 New York International Fringe Festival 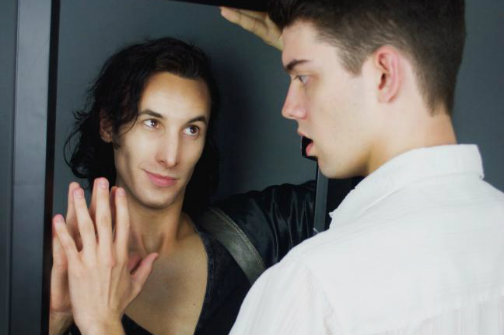 Scott Lilly and Taylor Turner in The Illusory Adventures of a Dreamer. Photo by Michael Kushner.

BOTTOM LINE: The Illusory Adventures of a Dreamer is an over-the-top, modernized version of Peer Gynt, and a rollercoaster ride that holds surprises throughout.

The Illusory Adventures of a Dreamer is a new adaptation of Ibsen’s Peer Gynt by Michael Bradley. In this version of the tale, a young man goes on a fantastical adventure of self-discovery to resolve his sexual identity crisis. Led by a mysterious figure called Boyg (Scott Lilly), Peer (Taylor Turner) encounters a plethora of obstacles including a group of trolls, the visage of his lover, the spirit of his mother, and an International Council of Purity that aims to "pray the gay away." Story elements and characters from the classical story became metaphors in a modern LGBTQ world.

The show is stylized like an improv troupe's performance, transforming a well-known story with a unique spin. It is deliberately over-the-top and campy in order to indicate the fantastical nature of the dream world the hero is exploring. An ensemble of actors creates different scenes and shifts into different characters with the snap of a finger. As Boyg, Lilly does a fantastic job creating a mischievous character with a veil of apparent evil yet unavoidable tenderness. Turner plays an earnest and wide-eyed Peer Gynt with much credibility. Among the ensemble, Austin Jennings Boykin creates a manic yet fascinating presence as the Troll King in addition to distinct characterizations of his other parts. Geovanny Fischetti, who plays Peer Gynt’s lover Solveig, choreographs the production, and creates a distinct movement vocabulary that’s deliberately callous, deliciously sexy, and effortlessly hilarious.

The show might be described as a mash-up of Pippin, Inception, Cabaret, and a Beetles music video from Sgt. Pepper’s Lonely Hearts Club Band. These references, which at times can feel forced, are at the very least readily apparent, from the characters pulling Beetles references left and right, and from the “troupe of players” nature of the ensemble. The Illusory Adventures of a Dreamer would benefit from an occasional change of pace, and clarification of the different levels of consciousness the main character is in. The show also underlines how difficult it can be to find that perfect sweet spot of over-the-top campiness. But the play's structure is brilliant, and with some trimming of a few redundant parts, The Illusory Adventures of a Dreamer could be a wonderful re-telling of a classic.

The Illusory Adventures of a Dreamer is by Michael Bradley. Director is Chris Goodrich. Music is by Marc Giguere. Choreography is by Geovanny Fischetti, Lighting Design is by John Cuff. Costume Design is by Devon James. Dramaturgy is by Claire Hackett.