Off Off Broadway, Solo Show
Runs through 8.28.16
VENUE #4: Abrazo Interno at the Clemente, 107 Suffolk Street

THIS SHOW IS PART OF FRINGE ENCORES, PLAYING AT SOHO PLAYHOUSE FROM 10.20 to 10.22.
FOR TICKETS AND MORE INFO VISIT sohoplayhouse.com. 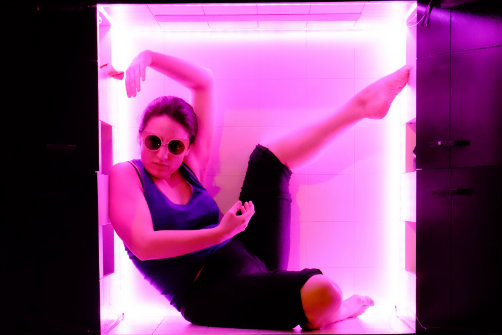 Dominique Salerno in The Box Show. Photo by Ann Beyersdorfer.

BOTTOM LINE: The Box Show tightens limits on space, but not on comedy.

One box, 3 feet by 3 feet by a little bit less, lifted about the same distance from the ground, manages to encompass a whole night of comedy, thanks to one powerhouse performer and her creative team. Dominique Salerno is an endless well of energy as she navigates mythical Greece, a cruise piano lounge, the birth canal, and many other improbable places and scenarios from the un-safety of a box so small she can’t even kneel, much less stand up.

Half the fun is seeing Salerno twist and wiggle through her tiny performance space; the other half is, of course, the delightful scenarios she and her team have devised. The show runs like a great night of improv: some scenarios will undoubtedly appeal more than others to different folks in the audience, but everyone is almost guaranteed to get a good laugh at some point.

The order of scenes is organic, but again like improv, certain scenes often seem to spur or refer to others. An unusual figure offers a well-delivered aria (!) from Purcell’s Dido and Aeneas, which shares context with a scene from within the body of the Trojan Horse (a true delight, using the box’s four small doors to full advantage), as well as the poignancy of a particular Broadway show tune. The name of a poor, harried recording studio assistant appears again elsewhere—to reveal would be to spoil. The Box Show’s flow of self-reference adds a satisfying unity to Salerno’s versatile character-switching.

Dominique Salerno’s creation is in its third run, with previous performances at Dixon Place and the United Solo Theatre Festival, so it’s a well-polished little gem; it almost seems unfair to compare it to some of the other performances having their premieres at FringeNYC. Yet comedy is not comparative—and this show is hysterical.