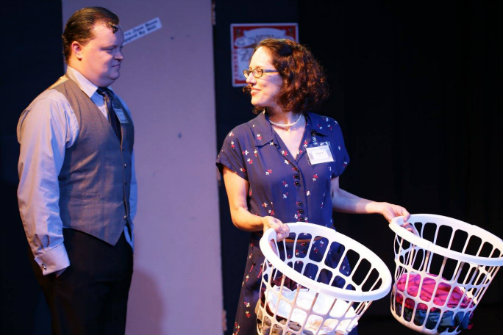 BOTTOM LINE: A musical display of salvation and swing, set in an uncanny version of purgatory that brings together an ensemble of biblical origins.

Jivin’ Jove! The 800th Annual Salvation Swing-Off casts the complex of government bureaucracy off to the jazzy afterlife. Nestled somewhere in this hierarchical infinity is a close-knit gang of angels, demons, and lost souls, recently deceased and condemned to launder their clothing for eternity. These post-mortem humans, arriving in Purgatory after their Earthly demise, have been caught by a celestial filter blocking their direct ascent to heaven.

The main pair of deceased, Sukey (Alyssa Stowe) and Reese (Loryn Jonelis), open the play, dumbfounded, in response to a screeching car-tire sound effect signaling their death. Sukey and Reese come to grips with their recent demise, stumbling through various emotional obstacles as they try to harness a clumsy romance. Stowe and Jonelis occasionally let show the awkward non-sequitur of their romantic pairing. Playwright-director Malissa Petterson seems to be interested in an exploration of gender and identity, but the authenticity of the pair’s partnership falters in the shadow of this greater ambition.

Waiting for them in limbo are Eden, Olive, Mikey, and Gabe (Heather Jane Farr, Morganna Grim, Dunes, and Mitch Taylor), work-weary administrators who produce the titular dance-off. Block Supervisor Eden, played with stern impatience by Farr, conceals a desperate, sexual self-expression that occasionally rises to the surface. Sukey and Reese, along with their posthumous peers Mara and Deacon (Wendy Prosise and Anthony Cary), practice their steps for the dance-marathon in hopes of claiming the top prize, a chance to live out immortality in the Kingdom of Heaven. The plot elements and innumerable relationships make for a play that is as much farce as it is melodrama. The clear stand-out in this ensemble is Stacey Garbarski, who plays an endless collection of secretaries all with brassy excess. Garbarski’s characters, named "Virtues," all differ by one essential quality or another, yet each is somehow unbearably loud and gabby. The Virtues, and Garbarski’s dexterity, offer a much-needed familiarity against a series of plots and schemes that can be difficult to follow.

Bouncing alongside the action is a jaunty soundtrack of swing and dance music. There is original music by Jennie Huntoon for the swing-off, although it falls a bit short against such a robust, classic soundtrack. One glaring misfire is the use of a brief musical introduction every time an angel enters from the wings. This theme prevents the actors from taking advantage of an abrupt entrance, as they must wait after storming onstage for the sound to die off before speaking their minds. The climactic dance-off breaks apart of its own accord: one by one, the competitive pairs inexplicably flounder and are shooed offstage by the chaperones. It remains difficult to understand why any of the competitors become so suddenly inept, but the underdog protagonists seize on this luck and take the crown. Petterson’s script ventures delightfully into the absurd, and suggests a play very different from the coalition of gender, sexuality, piety, and melodrama that underpin Salvation Swing-Off for most of the time. Altogether, this unlikely assortment of seraphs and secretaries deliver a light-hearted romp on the Bible, letting loose their most famous characters in a heaven far different from the image inured by Sunday School class.

The 800th Annual Salvation Swing-Off is written and directed by Malissa Petterson. Choreography is by Jessica Jane Witham and Loryn Jonelis. Assistant Director is Heather Renken. Lighting Design is by Taylor Kokinos. Costume Design is by Lindsey Hoel-Neds. Sound Design is by Viktor and Malissa Petterson. Set Design is by Viktor Petterson. Stage Manager is John Siewert. Scenic Painter is Teresa Sarkela. Lighting Technicians are Ilsa Reed and Ben Otto. Sound Engineer is Sam Miller. Board Operators are Taylor Kokinos and Heather Renken. “Laundry Rag” is composed by Jennie Huntoon.