Tales of a Sexual Tomboy

Off Off Broadway, Solo Show
Runs through 8.27.16
VENUE #4: Abrazo Interno at the Clemente, 107 Suffolk Street 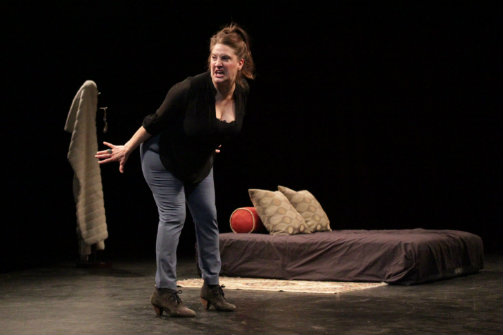 Joyful Raven in Tales of a Sexual Tomboy. Photo by Sojin Han.

BOTTOM LINE: A multi-talented lady tells it all through, dance, song and Mae West impersonations...and it’s a lot of fun.

Writer-performer Joyful Raven begins her show with an abortion joke, and with that setting of the tone, we're off. For the rest of the show, Raven shares many stories about the different men she’s dated and the many lives she’s lived. She grew up in a theater company created by her hippie parents and moved on to become a salsa dancer, a cabaret artist, a Mae West impersonator, a Reggae fan, and I’m going to guess many more things that she didn’t mention. Tales of a Sexual Tomboy covers all this, sprinkled with sex and men and real entries from her real diary.

Raven's openness and honesty is what I appreciated most about her show. She tells us stories of awful break-ups and the things she should have said but couldn’t at the time. She connects the stories from her life right before our eyes, and comes out stronger on the other side. For Raven, as for so many people, it seems that perhaps hindsight really is 20/20. Perhaps the only thing we can do is learn from our pasts. Raven is able to synthesize this all into her show using skillful impersonations and amazing physical comedy.

While I found myself laughing and having a great time, the style of Tales of a Sexual Tomboy isn’t entirely clear. Is it stand-up, cabaret, or more of a classic story-telling solo show? Raven initially addresses the audience as if we're at a comedy club. Then after her first story, she plays herself as a small child talking to her mother. The transition between these two genres doesn’t feel as seamless as I would have liked, and the show as a whole would benefit from a clearer purpose. But perhaps she is still finding the voice and feel of this self-reflective piece. Raven is a talented and truthful performer finding her way through her show, just as she continues to find her way through her life.