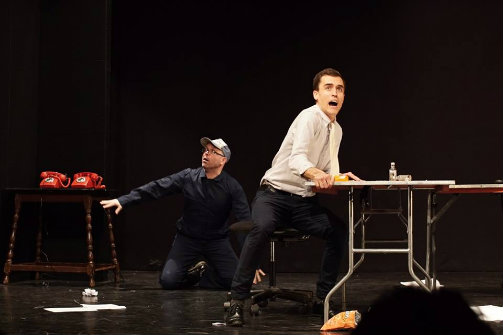 BOTTOM LINE: This zany comedy, inspired by the events surrounding the Sony Pictures hacks, offers plenty of laugh-inducing material and pokes fun at our celebrity-obsessed culture.

The 2014 film The Interview brought unprecedented events to Hollywood when a parodic depiction of North Korean leader Kim Jong Un led to Sony Pictures being attacked by hackers (allegedly) dispatched by the country. The hackers released internal emails, many of which spoke negatively of leading actors and revealed notable pay gaps, leading to firings and derision. The hackers also posted unreleased films from the studio and threatened “9/11 style” attacks on any theaters that showed the film. The events were memorable not only for being the first time a foreign dictator attempted to censor the American media, but also because it gave a glimpse into the nasty, petty, cutthroat culture of Hollywood executives.

Zach Stephens’ Tailspin! offers a satirical retelling of these events creating a zany, slapstick comedy that offers telling insight into our celebrity-obsessed, social-media-saturated culture. The play opens with a lowly assistant bursting into the “situation room” of Babylon Studios to deal with the company’s recent hackings.  Showing a bit of well-staged physical comedy, Henry (played by playwright Stephens) runs to the ringing red emergency phone while tripping and dropping an armload of scripts and internal memos. He is soon joined by the simple-minded but well-meaning janitor Bernard (Dick Ward) and his fellow assistant Mia (Kelsey Lea Jones) . Their bitch-in-heels boss Olivia (Elizabeth Zephyrine Mcdonough) soon enters with a stack of the leaked emails and makes Bernard and the assistants give dramatic readings of them to fully experience the damage that has been done.  When a phone is accidentally left off the hook during their heated discussion, a statement is accidentally given to the press referring to Kim Jong Un as looking like “a Twinkie soaked in duck fat." The hackers escalate their threats in response, aiming nuclear missiles at the studio’s headquarters unless the film is pulled from theaters.

While the events that inspired Tailspin! may not be fresh in audiences’ minds to give this play the resonance it may have a year ago, it still offers plenty of comedic insight into our entertainment-centric lives. A duo of inept lawyers from the studio’s legal team (played by Julianne Cross and William Cary) answer every question with a reference to a movie or TV show, and at one point even reenact the Modern Family opening sequence, all the while completely ignoring the fact that they may be murdered by North Korea. Olivia interrupts emergency discussions to Snapchat with Rhianna, an interaction that provokes envy from the assistants. Even the president is more concerned with getting Jamie Foxx to play him in the movie version of the events than stopping North Korea from attacking. Each of these serve to emphasize the mindset created in an era with constant access to media. Each of the actors (guided by director Kelly Webb) shows a knack for physical humor and for delivering their lines with the full comedic potency intended by playwright Zach Stephens.

Tailspin! is by Zach Stephens. Directed by Kelly Webb.  Sound Design is by August Belfiglio. Stage Manager is Kirsten Williams.