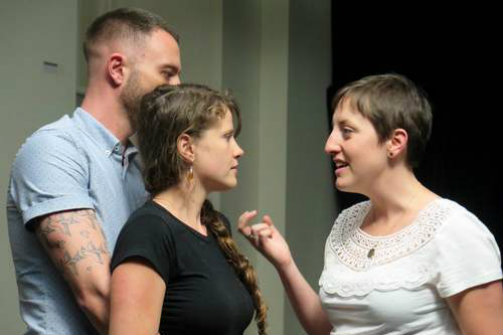 BOTTOM LINE: Alla Ilyasova’s Svetlyachki sheds light on what happens when children, who have no fault other than their blind faith, are put in positions of extreme power and authority, if only amongst each other.

As we all know, first impressions are everything, and sound designer Daryl Bornstein wastes no time in setting the tone for Alla Ilyasova’s new play, Svetlyachki. The audience is greeted by the angelic yet haunting harmonies of a children’s choir singing hymns in Russian, which sets the stage for this grim but somehow hopeful story of six orphaned children in the height of Bolshevik control. Paired with Shawn Lewis’ set design, which consists of a ladder, a birdcage, a flask, a trumpet, a crate, and cloth atop large blocks, we get the vibe of a dismal, high-stakes children’s game. As it turns out, that is exactly what we are going to experience.

At the top of the show Masha (Julia Christgau) and Yemelya (Evan Sokal) use these set pieces to build themselves a bridge, on which they sit, fish, and provide exposition, as children do. We find out that Masha is the orphaned daughter of a White Army officer, and Yemelya is an unsure member of a squad of children who do whatever they can to support Vladimir Lenin. It is a classic setup of friends across enemy lines.

When Masha gets captured by this squad of children, we meet Vishka, the drunk bad boy (Ross Alden), Verka, the die-hard leader (Stephanie Fagan), Klop, the bundle of nerves (Ken Urso), and Yakov, older brother to Yemelya and leader of the squad (Jordan Gwiazdowski). Gwiazdowski’s performance is nuanced and calm without being emotionless, and truly captures the blend of sensitivity and cold authority that might exist in a young man who has been forced to grow up too fast. Masha’s capture serves as catalyst for the breaking and forming of relationships, as well as providing insight into these characters, whom we often forget are just kids.

These actors are most certainly no longer children, and yet their physicality and vocal choices are very successful in creating the environment of a dangerous children’s battleground. In addition, Dani Blum’s costumes, which are based on Young Communist propaganda from the Soviet era, evoke a chilling cross between the more widely-known Hitler Youth and Peter Pan’s Lost Boys. Add in the fact that the characters build all their own sets, which end up looking like a particularly sturdy version of when kids play pretend, and things get really frightening.

There are a few moments in which the writing and direction can use tightening: monologues roll on too long, motivation is sometimes unclear, and individual relationships have the tendency to be a little muddy. However, the story moves in ways that are unexpected, considering the almost 100 years that stand between us and the events taking place. As to why the play is called Svetlyachki: it is the Russian diminutive for “light.” It pains me that this was not mentioned in the entire two hours, because these children certainly are little lights, and should be treated as such.

Svetlyachki is by Alla Ilyasova. Directed by Colleen Britt. Set Design is by Shawn Lewis. Lighting Design is by Janet Berka. Sound Design is by Daryl Bornstein. Costume Design is by Dani Blum. Fight choreography is by Katie Downey. Stage Manager is Danielle Campbell.