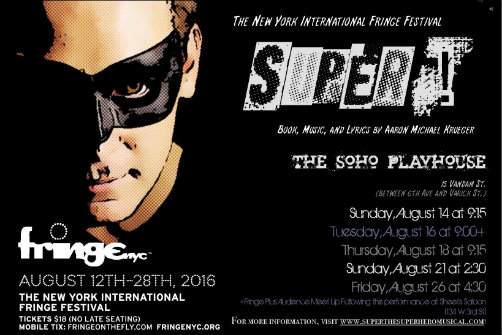 BOTTOM LINE: A boisterous score and energetic performances allow SUPER! to rise above a convoluted plot.

Superheroes have long been a mainstay of popular culture, populating dozens upon dozens of films, television shows, and, of course, comic books. But their presence within the musical theatre canon has been noticeably lacking, leaving a void that composer/playwright Aaron Michael Krueger hopes to fill with SUPER!, his new musical.

SUPER! tells the story of Mark (an endearing Tyler Egan), an ordinary young man with extraordinary abilities, and his journey to embrace his gifts as he morphs into the crime-fighting vigilante his community so desperately needs. Krueger’s musical makes good on all of the familiar plot points of the superhero genre, detailing the origin of Mark’s superpowers, his loving relationship with his worrying mother (a fantastic Anna Laura Strider), and his blooming romance with his high school crush, all the while framing the narrative within a device that challenges audiences to question the political consequences of superpowers.

Krueger’s score is SUPER!’s strongest suit, its songs soaring above a plot line that often zigs and zags in unpredictable and unnecessary directions, especially in the show’s second act. Standout numbers include “I’ll Prevail,” the second-act opener performed with gusto by Ryan Hestand as Alex, Mark’s sidekick-turned-nemesis, and “Fly,” a duet between Mark and his love interest Laura (Chloe Kostman), complete with some impressive musical staging from choreographer Carmela Girdlestone. SUPER!’s score also benefits greatly from its band, led by conductor Emily Goggin, which sounds full and polished, a nice treat for a Fringe musical.

It’s certainly a challenge to merge the superhero genre—something known for its fantastical locations, its special effects, its flying!—with that of musical theatre, but SUPER! is well on its way to creating something special. While Krueger’s story may need to work out some of its kinks, his characters are well-drawn and interesting, and his score is filled with some impressive musical moments. If given the necessary revisions, this is one superhero show that will have the chance to fly above all the rest.

SUPER! is written and directed by Aaron Michael Krueger. Choreography is by Carmela Girdlestone. Set Design is by Sam Krueger. Lighting Design is by Emma Jorgensen. Costume Design is by Julia Krueger and Deborah Krueger. Executive Producer is Garreth Browne.