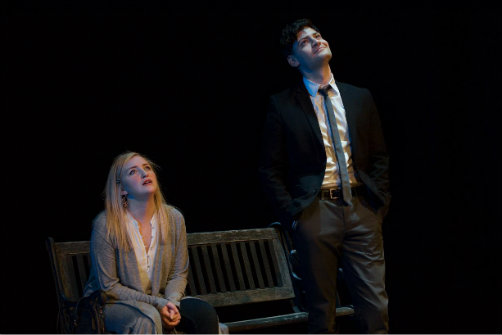 Shelby Hightower and Harrison Bryan in Still Not. Photo by Jay Zawacki.

BOTTOM LINE: An honest portrayal of love blossoming and slipping away.

Their first meeting is happenstance. The man walks by a bench with a woman sitting on it. He is attracted to her and consequently, to it. He sits. They interact awkwardly, as all strangers finding themselves in close proximity do. The man leads the interactions, at first. Eager and curious about her, he asks questions and tries out one-liners; some land, some don’t. But he keeps trying nonetheless. It’s sweet. The woman is not as open to HIM as he is to HER (the characters are otherwise unnamed). But she smiles and speaks, though it’s clear she is merely passing the time while waiting. For her boyfriend, she explains, well, her soon-to-be ex. And from there the stage is infused with a tension that comes as a result of each character’s internal conflict: the woman is afraid of change but increasingly longs to give in to this man’s kindness, and the man is unsure but exceedingly hopeful for this budding romance to flourish.

The tension in Still Not is present thanks to the great naturalistic dialogue constructed by playwright Harrison Bryan. Bryan also portrays HIM honestly and intelligently, staying subtle when need be and bubbling with over-the-top enthusiasm at just the right moments. Those moments are rich and rare throughout. As HER, Shelby Hightower suggests, without making too obvious, the woman’s deep insecurities. She is stuck in her own ways though she wants to appear free. The chemistry between the two is palpable and at its most satisfying once the dialogue gives way to more sincere exchanges rather than drawn-out awkward silences and sideways glances. Direction from Rory Lance is delightfully specific in constructing these two character’s physical lives, differentiating their distinct ways of being while simultaneously providing them with numerous ways to connect.

What happens while this woman and man play this waiting game, one that becomes a bit too convenient a circumstance for these two to keep converging, is a love affair in microcosm. There’s confrontation and vulnerability and shying away and fighting off only to return again to what has grown to feel good. There’s forgiveness and laughter and lines crossed and a breaking down of barriers. There’s a lot of what occurs in real relationships—the kind that last years and take longer to get over. But Bryan and Hightower charge the stage with all that stuff—the stuff of one person caring about another, the stuff of love without the high stakes of love's usual portrayal. By the end no one is going to die, or even want to, for the sake of the other. This love is simply the spark of something real that the audience gets to see light up and flicker for a while.

The cast is Harrison Bryan and Shelby Hightower.