Sinners on a Southbound Bus 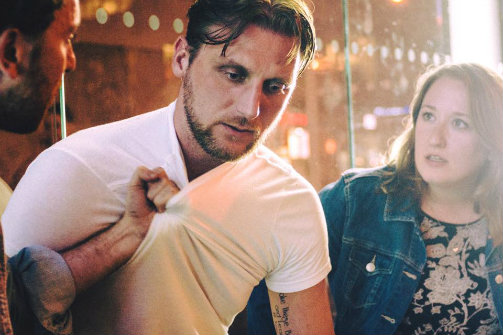 Nabil Traboulsi, Michael Coppola, and Katie Healy in Sinners on a Southbound Bus.

BOTTOM LINE: A well-crafted thrill ride on a late night Alabama bus, Sinners is a hot-blooded meditation on what truly happens when we run from the ghosts of our past.

The setting is simple. Chairs arranged two-by-two along a diagonal aisle. A single seat furthest downstage for the driver. Moon Pies and R.C. Cola. Welcome to a cross-section of this night-time bus, making its way south along the shadowy swamps of the Alabama backcountry, where ghosts rise with the mist and are as permanent as the scars of our sins.

Meet Morgan and Silas (Michael Coppola and Nabil Traboulsi), the two men to the left of the aisle. At first glance they resemble Steinbeck’s Lennie and George, but their dynamic is nothing so simple as brains-and-brawn. The young woman to the right is Trudy (Katie Healy)—friendly and quick-witted, with a moral compass all her own and the tenacity to back her words with action.

As we move along, the business-minded bus driver (David Bell) picks up a few more passengers, such as the holier-than-thou Delta Avery (Renette Oracien), and a young couple on their way home from exercising (Adam Towers and Ashley Versher). The only factor slowing this bus on its way to Dothan is the local police officer (Scott Brieden), on the hunt for an unidentified team of killers.

In a time when many new works strive to impart a lesson to their audience, Sinners on a Southbound Bus delivers a refresher in why people actually come to the theater—to have a story told to them, and to hopefully have it told very well. Without giving too much away, this is exactly what Ben Holbrook has accomplished in his writing: maintaining a consistent sense of danger and intrigue while revealing his character’s sins through a distinct Southern poeticism. The bus transforms into an emotional and spiritual pressure cooker that would make any sane person want to jump off at the next stop, were they not so curious to see what comes of it all.

As strong as it is, Sinners does not come without the rough edges of a play in development. The language, though often beautiful, edges at times on drama-speak, and also is in danger of polluting the narrative’s overall sense of reality (which for the most part stays impeccably intact). The Southern dialects seem to present a challenge to the otherwise compelling cast of actors, cutting into their vocal energy and creating a distraction for the audience. These factors, though relatively minor, lead the production slightly awry from the excellent pacing, energy, and tone that will take this show to its next level. But at its core, Sinners offers exactly what good theatre should: a compelling story told well. I am excited to see where this show goes next.

Sinners on a Southbound Bus is by Ben Holbrook. Directed by Phoebe Padget. Lighting Design is by Felicia Hall. Sound Design is by Alex Dietz-Kest. Stage Manager is Grace Gasner.