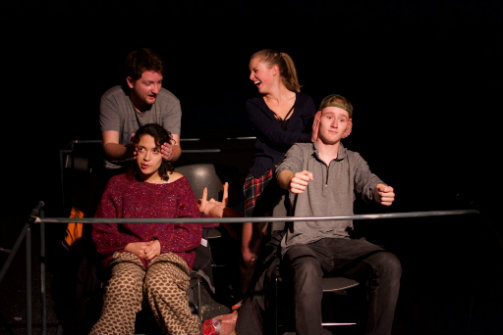 BOTTOM LINE: Roadkill is an energetic and intelligent look at sexuality, feminism, and the ways we relate to one another.

Lindsey McPherson is a slut, or so we’re told; the truth is a bit more complicated. In this devised work, created as playwright Leah Sarbib and director Tosca Giustini’s college thesis, four friends embark on a long car trip, and conversation quickly turns to their friend Lindsey (Leah Sarbib), who mysteriously dropped out of school and went off the grid. As each one defends their individual memory of Lindsey, shifting in and out of flashbacks and imagination, we begin to gain a fuller picture.

Three of them have known Lindsey for a long time: Taylor (Chelsea Melone) and Lindsey were best friends (and almost—maybe—more?); Taylor’s boyfriend Cameron (Will Lupica) went to summer camp with Lindsey when they were kids; and Jordan (Jabari Matthew) grew up with Lindsey and is still in love with her. The fourth, Santana (Tosca Giustini), is new to their school and, to her knowledge, has never met Lindsey. As the conversation shifts to evoke feelings of betrayal, loss, confusion, and love, we learn a great deal about Lindsey through seeing snippets of her interactions with these friends.

The most impressive part of this piece is how entirely organic it feels. What could be lengthy, academic discussions of feminist theory are successfully conveyed in short, insightful observations about how women operate in our society, arising naturally from their conversation, like Taylor’s statement that saying sorry “is like the ‘um’ of my life.” The show slips in and out of reality, briefly turning into fake car radio commercials or musical interludes that further explain a character’s feelings about Lindsey. In a show so much about sex, the actors do exactly what you’d expect to a bunch of bananas; this goofiness also helps to balance the moments that might otherwise feel too dry.

Roadkill succeeds at questioning one of the most pervasive issues women deal with, all without uttering the word “feminist.” Needless to say, you don’t need to have a degree in Gender Studies to get something out of this entertaining hour.