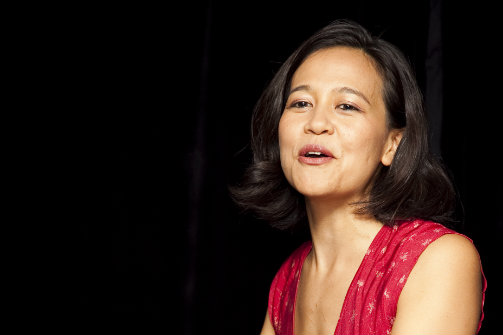 BOTTOM LINE: Reclaiming Vietnam connects one woman’s childhood trauma with the exploration and acceptance of her heritage.

Performing her one-woman show has a clearly cathartic effect for Kim Chinh, who spends her hour on stage sharing her experiences traveling to Vietnam for the first time, and how confronting her childhood abuse allowed her to finally embrace everything about herself that she once rejected. Bouncing between two timelines—her trip and the two years leading up to it—Chinh loosely connects the stories she tells, but rarely allows the writing to get specific enough for the audience to experience emotional catharsis of their own.

Chinh, whose father is Vietnamese and mother is white, always hated her Vietnamese heritage; it seems she took a cue from her father, who never talked about his homeland or made an effort to share the culture with his children. When Chinh reveals that she was sexually abused for five years by four of her refugee cousins from Vietnam, the reason for her subsequent avoidance of her family's history comes into sharper focus. Grappling with her past and sharing her story, we learn, helps her feel ready to visit Vietnam and to newly incorporate that part of herself into her identity.

The most evocative sections of the play come when Chinh depicts some of what occurred in the attic of her childhood home. Unfortunately, the story doesn't go much deeper. In one of the more effective metaphors, Chinh makes a tenuous connection between the broken hand she suffers in a moped crash her first week in Vietnam and her slow healing process since facing her trauma. Ironically, in a piece about moving on from the past, more time is spent re-enacting each of the four confrontations she has with her abusers than on the profound renewal she feels in discovering her father’s homeland. The discussion of her time in Vietnam consists of generic statements proclaiming the country’s beauty and describing the joy of the children in an orphanage she visited, rather than providing any deeper insight.

Ultimately, Reclaiming Vietnam feels like a highly edited version of Chinh’s story, with the rough edges smoothed out. The emotions that drove her to finally connect with where her family comes from are never addressed, so much of the story lacks urgency. As meaningful as it is to see her come to terms with her past and forgive, I was left with a lot of lingering questions.

Reclaiming Vietnam is written and performed by Kim Chinh. Directed by Elizabeth Browning.