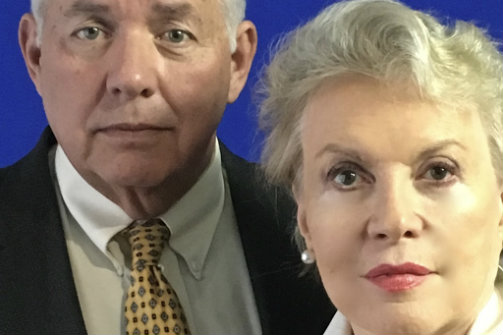 BOTTOM LINE: Go inside the Iran-Contra affair with Jeane Kirkpatrick and Nora Astorga as they confront issues of politics, gender, and doing the right thing in a changing world.

When I read the tagline of Reagan’s Athena—“a hilarious romp with Ronnie and Jeane!”—I was confused. Wasn’t Reagan’s First Lady named Nancy? Of course, politically-minded readers will know that Jeane refers to Jeane Kirkpatrick, the first female ambassador to the United Nations and former Reagan foreign policy advisor. If, like me, you missed the Reagan years, a Wikipedia brush-up on the Iran-Contra affair and Sandinista Revolution in Nicaragua is recommended. Reagan’s Athena focuses on the U.N. during Reagan’s presidency, and the clashes of policy and personality between Kirkpatrick and Nora Astorga, a Nicaraguan revolutionary turned ambassador and legal powerhouse. Astorga shakes up Kirkpatrick’s beliefs about government, femininity, and her own life as the generational gap unfolds on the political landscape.

It is 1984. The show opens on a meeting between Jeane Kirkpatrick (Sharon Talbot) and her aide Charles (Steven Hauck). Kirkpatrick is planning her response to the impending entrance of Nora Astorga (Keri Uribe) onto the United Nations stage, where Astorga is beginning an international court case to sanction the United States for its participation in the Nicaraguan revolution. Meanwhile, in the Reagan-occupied Oval Office, Nancy Reagan (Carol Kuykendal) reveals her numerous problems with other women in politics, lambasting the “bitchiness” of Jeane Kirkpatrick in particular. Reagan (Bill Conner) takes advice from his wife and Jeane, and the main plot of the show unfolds.

As Nora Astorga enters the scene, the setting shifts to the U.N. Astorga carries a checkered history with the Sandinista revolution and regime that arose in Nicaragua following the overthrow of the Somoza government in the 1970s, and Jeane initially writes her off as a communist perra. The play primarily follows the changing relationship between Astorga and Jeane Kirkpatrick as they engage in “toilet diplomacy” in the women’s restroom of the U.N. Over a four year period, the two are first antagonistic, then sympathetic, and finally adopt a cordiality and eventual friendship. Kirkpatrick and Astorga bond over frustration with gender roles, pop culture, and mass marketing, and work through the generational gap and societal tendency to pit women against one another. But the main catalyst for their bonding is the evolving Iran-Contra affair, where the Reagans oust Jeane from her post (for astrological as well as political reasons) and keep her in the dark surrounding the seizure of weapons in Iran, weapons that are later sold to the Nicaraguan Contras fighting against Nora Astorga’s Sandinista comrades.

After learning that she has been betrayed by the Reagans, Jeane calls Nora at the end of the play, at a loss. The two realize they have much in common, and note how their similarities span generations and political ideologies. This friendship is cut short in the last two scenes, when it is revealed that Nora has been living with cervical cancer, of which, as depicted in the play’s final scene, she died in 1988 at the age of 39. Staying true to the historical facts throughout the script, Reagan’s Athena ends with tremendous uncertainty and frustration about contemporary politics and the aims of diplomacy.

Despite a cast and crew with long and successful Broadway and film careers, the production’s issues are surprisingly basic. The staging is static, and actors spend most of their time sitting down or facing front, with little movement or interaction between the four planes on the stage. Actors flub lines and visibly skip around the script, and the production suffers from unfortunate technical issues. The script is one-note, largely as a result of its reliance on telling rather than showing. Covering four years with large gaps in time, characters often describe their personal changes rather than actually undergoing them onstage. Consequently, there is little emotional arc for any character.

More concerning, the portrayal of female characters is sometimes problematic despite the playwright’s stated “interest in writing pieces about strong, courageous women.” Female characters’ behavior toward one another is often catty, relying on tropes of strong women that have a “problem with women” in order to be competitive in a male world. The word “bitch” is a running theme, making an appearance multiple times in every scene. Occasionally the dislike of women plays off comedically, particularly in Nancy Reagan’s over-the-top hatred of, well, everyone, but overall it reads as little more than stereotypical writing.

There are, however, a few successful moments. The chemistry between Jeane and Charles is palpable, and brings a genuine warmth to scenes which otherwise serve merely as explanatory interludes. As Charles, Hauck is a bright spot in all his scenes and easily proves the old line about small parts. Ronald and Nancy Reagan also play well off one another, and these scenes’ fun asides highlight an impotent and flippant political machine behind the very real consequences on the U.N. floor. The show is billed as dark comedy, and while comedic elements are inconsistent and frequently lost behind exposition, the moments that shine through are sharp and witty.