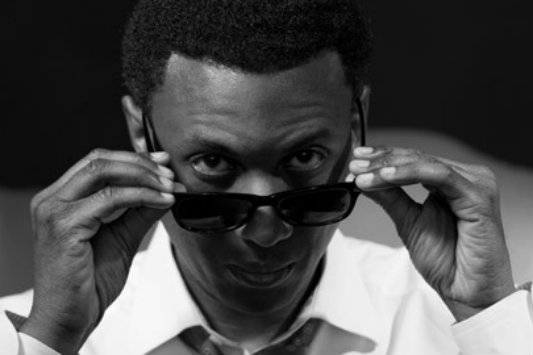 BOTTOM LINE: Meshaun Labrone is brilliant in his necessarily uncomfortable portrayal of one of the Civil Rights Movement’s less celebrated heroes.

Sometimes I go to the theater merely to be entertained. Sometimes I go to take in the spectacle or fabulous song and dance, or to take advantage of the relief provided by ridiculous, farcical comedy. And there is absolutely nothing wrong with that. However, sometimes I find myself taking part in a theatrical experience which moves me off my spot, makes me uncomfortable in my prior understanding of life, seemingly takes me by the shoulders and starts shaking hard, yelling “This is who we are! This is who we have always been! And you cannot continue to ignore that fundamental truth any longer!” Such an evening did I experience at POWER! Stokely Carmichael, the one-man show written and performed by Meshaun Labrone.

The first brilliance of Labrone’s piece is the setting: POWER takes place in the moments before the famous 1966 March Against Fear in Tennessee. Labrone, playing the titular character, walks onstage and begins to address the audience as the group he needs to rally as they head out for the march. It sets up a wonderful performer-audience relationship and gives Labrone a reason to speak to us for the entire seventy minutes. Labrone portrays Carmichael and several other characters to illustrate the injustice of our fundamentally racist society; thanks to the beautiful work of director Jennifer Knight, each character is distinct, hallowing, and necessary.

Throughout the piece, Labrone also uses a series of black and white images projected on the back wall to supplement his message. It is an impassioned message, and this passion is infectious. When Labrone reaches the climax of a speech, or says something which particularly resonates, many audience members respond vocally. The whole play thus has an uncanny resemblance to a church service with Labrone at the pulpit, delivering his sermon. It feels as though the audience is as integral to the experience as Labrone is himself, and this sense of total immersion makes the play that much more engaging and enveloping. I won’t spoil anything, but the play features moments that are “squirm-in-your-seat” uncomfortable, balanced by moments of heartwarming beauty, all of which combine to create an experience that I will be thinking about for a long, long time to come.

POWER! Stokely Carmichael is especially necessary right now, and I thank Labrone and company for offering up such a moving piece. It should be noted that part of what made POWER so moving for me is that I was one of precisely five white people in the sold-out audience. The entire time I felt like a voyeur witnessing a gathering that maybe wasn’t meant for me, or at the very least wasn't designed with me in mind, as if the curtain had been pulled back and I was getting to experience something that could never be adequately explained. But after thinking about it more, I have come to realize that this feeling—that maybe I shouldn’t be watching—is precisely why I, and anyone else who can make it, must watch.