Night of the Living N-Word!!

By Kevin R. Free; Directed by Nicole A. Watson
Produced by MyCarl Productions in association with Kampfire Films
Part of the 2016 New York International Fringe Festival 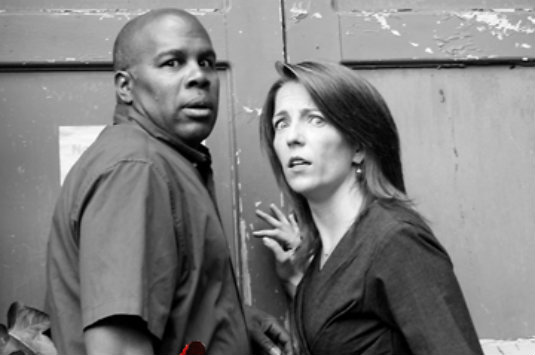 Kevin R. Free and Eevin Hartsough in Night of the Living N-Word!!. Photo by Todd B. Backus.

BOTTOM LINE: A horror movie parody about an awful word that refuses to die.

In these sad times of continued racial unrest, there can never be too many conversations about privilege, bigotry, inequality, and the power of our words. Kevin R. Free's Night of the Living N-Word!! attempts to address these horrors by parodying the horror genre.

Entering the theatre we hear the sounds of a haunted house (Carl Riehl designed the creepy and evocative sound throughout). We are then introduced to a mixed-race family: white mother Barbra (Eevin Hartsough) and biracial son Channing (Aaron Parker Fouhey) watch Black father Ben (Kevin R. Free) on the television, playing his iconic TV role of a police officer who uses the no-no word of the title. Barbra flips out when Channing mimics his father using the offending word and her war on the N-word is revealed. The setting then shifts (via Joshua Coakley’s comically designed two-dimensional cut-outs) to the spooky old plantation where Barbra grew up with her racist parents. Barbra has brought her family here for a birthday celebration/N-word intervention for Channing—because “bad things happen when you use that word.”

History is revealed (or is it just a red herring?) that a few years ago Barbra, along with her father-in-law Clayton (Stanley Wayne Mathis), actually “killed” and buried the N-word. Yet, as in every horror movie, just when you think the boogie man is dead, he rises up again, refusing to stay dead forever.

Free’s script genre-jumps, hitting territory everywhere from Friday the 13th to Ordinary People to Gone With the Wind to Scooby Doo (including the hidden true identity of the mysterious Aunt Jinny, played by the wonderfully ambiguous T. Thompson). These multiple forms result in confusing the audience about the very resonant ideas that Free seems to want to address. What role does the N-word have in our culture? Who does own it? And what does this idea of ownership mean in light of a history where people owned other people? At its heart, Night of the Living N-Word!! takes a stab (pun-intended) at tackling these ideas but the overall effect gets overwhelmed by the various styles the script and Nicole A. Watson’s direction employs.

Though there is a definite messiness and complexity to these issues and they are not going to, nor should they, be ironed out neatly in an hour and twenty minutes of theatre, I do appreciate Free’s endeavor in allowing his audiences an opportunity to continue this vital conversation.

Night of the Living N-Word!! is by Kevin R. Free. Directed by Nicole A. Watson. Wig/Costume Design is by Bridget Brennan. Lighting Design is by Lauren Parrish. Sound Design is by Carl Riehl. Properties Design is by Joshua Coakley. Fight Direction is by Dan Renkin. Dramaturgy is by Todd Brian Backus. Stage Manager is Clarissa Ligon.