By J. Elijah Cho; Directed by Jack Holloway
Produced by Some Sort of Show and Hat Trick Theatre
Part of the 2016 New York International Fringe Festival 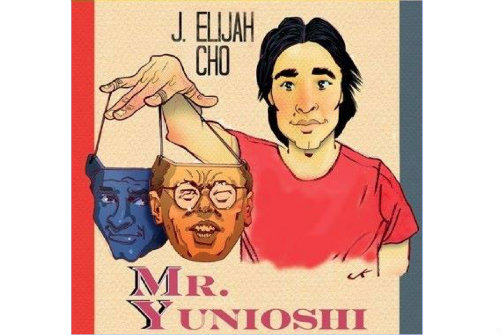 Mr. Yunioshi is a crisp satire of Mickey Rooney’s notorious “yellow-face” performance in Breakfast at Tiffany’s. From the start, Rooney was woefully, insensitively miscast. But J. Elijah Cho understands that to simply point out what is (now) obvious isn't enough; his play and performance are both sly as foxes. Cho imagines Mickey Rooney as a man with the desire to build a credible character, only to have his hopes dashed by Hollywood.

Cho cheerfully and sardonically embraces Rooney’s incredulous journey. Cho’s “Rooney” is amazed to learn that all Asians are not the same: Japanese and Chinese people are different, and even have different languages and accents! “Rooney” struggles with such “strange, hard to pronounce ” names such as “Capote,” and then “Toshiro Mifune.” “Rooney” contacts Toshiro (who frequently worked with Akira Kurosawa) to learn about Mr. Yunioshi’s culture. Toshiro Mifune was a Superstar in Asia—an Asian Matt Damon, if you will—but he was practically unknown in the US. Which prompts the question: Why didn’t Hollywood cast a Japanese actor for Breakfast at Tiffany’s to begin with? A combination of racism, ignorance, and prejudice made it impossible. When “Rooney” meets with Toshiro, they speak about the Japanese internment camps during World War II, and about Lawrence Oliver, touching on Olivier’s blackface performance in Othello. “Rooney” is oblivious to the point.

But Cho and director Jack Holloway don’t simply skewer Mickey Rooney. They are clear to point out that Rooney was a marvelous actor, but one who was perhaps blind to the idea that his performance was discriminatory and ignorant. What was a funny cameo to him (and sadly, to many others) has become a touchstone for all that is wrong with the Hollywood/Film/TV industry when it comes to casting. Where are the Asian Matt Damons or Asian Scarlet Johannsons in this country? It is a valid question, and one that Cho raises in shrewd and funny ways.

Holloway keeps the set and staging simple, letting the words take center stage. And Cho does a terrific job, ending on a high, comical note, and showing us that while our society has come a long way, it hasn’t come far enough. It’s a very cunning and subtle show, at times almost too clever for it’s own good; I worry some may miss the satire. That said, the world obviously needs more inclusive casting, more A-List Asian actors, and it certainly needs more Cho.