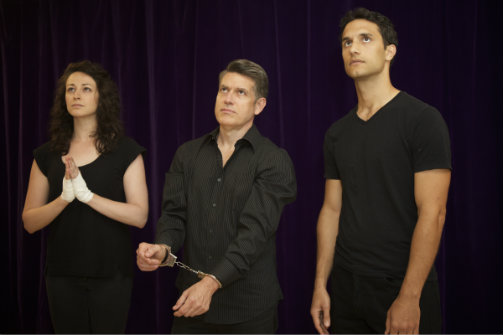 Lauren Mack, Preston Smith, and Jeff Gorcyca in Movin' On Up. Photo by Clay Williams.

BOTTOM LINE: For those with more questions than answers, Movin’ On Up offers an unexpected glimmer of existential hope.

Movin' On Up is publicized as absurdist, but perhaps this label doesn’t serve the play well. Absurdist plays create a world where the meaninglessness of existence is circumstantially proven onstage. Done right, they’re insanely entertaining; if existence is meaningless, then stakes in the moment are sky-high, because without existential purpose there’s only this moment. In an absurd world, everything matters, not nothing. Think of the manic, vital importance Gogo and Didi place on a pair of boots, and of the carrot v. turnip question, in Waiting for Godot.

Movin’ On Up, on the other hand, spends a great deal of time questioning why characters are in the graveyard limbo space that they're in. Reasonable things matter to them: where they are; what’s next; who did or didn’t express compassion toward whom in their past. The central character, the Watchman (Jeff Gorcyca), keeps a cool exterior, shutting down the other characters’ journeys toward “moving up” toward whatever next step there is by telling them in a dozen different ways to “shut up,” because he needs peace and quiet to do his fuzzily-defined waiting work. These shutdowns are often accompanied by a Clint-Eastwood-esque scowl.

Encountering that brick wall, even the goofy Oh Brother, Where Art Thou? pluck of Lewis (Preston Smith) and the lively, confident questioning of Joan (Lauren Mack) both end up disappointed, or at least muddled. Their frustration leads to a final impression that the world of Movin’ On Up has meaning—they just can’t figure it out. The simple fact that there is meaning makes this a more optimistic worldview than true Absurdism, and the end of the show leaves a more hopeful taste in your mouth than it might otherwise. It’s certainly not the dark, trivial romp that one might expect from a show that self-identifies with that old nihilistic performance tradition.

Movin' On Up is written by Jeremy Kehoe. Directed by Christian Amato. Company represented by Veronique D’Ory. Publicist Andrea Alton.

The cast is Jeff Gorcyca, Lauren Mack, and Preston Smith.