THIS SHOW IS PART OF FRINGE ENCORES, PLAYING AT SOHO PLAYHOUSE FROM 9.9 to 9.17.
FOR TICKETS AND MORE INFO VISIT sohoplayhouse.com. 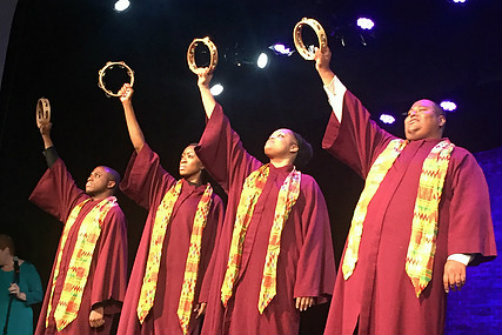 The cast of Mother Emanuel.

BOTTOM LINE: Mother Emanuel is a moving and powerful piece of documentary theatre, honoring the victims of the shooting at Mother Emanuel African Methodist Episcopal Church through gospel music.

The creators of Mother Emanuel must have been busy for the past year, because their play is centered around an event that took place just over a year ago: the racially charged mass shooting at a Charleston church on June 17, 2015. The play alternates between scripted scenes and gospel singing, with the action focused on the bible study group on the evening of the shooting. But this is not a purely mournful performance. This play exposes the pure joy, humor, and sorrow of not only each character, but of the performers themselves.

This is documentary theatre at its finest. Watching the actors morph seamlessly between the Charleston Nine and others—including a fantastic portrayal of President Barack Obama by Marquis Gibson—is supremely satisfying. The actors perform comedic and dramatic scenes with dexterity, providing an emotional roller coaster for the audience. But most impressive yet is the actors’ ability to simply be onstage. Never do they officially play themselves, but at times, they drop the characters and let their own humanity shine through the performance. Never is this more true than when they let go and sing.

Their voices are beyond this world. The Charleston Nine are singing to God, and their voices shoot from the bodies of the actors portraying them. This is a production in which voice and soul transcend character and theatricality. This is not only a play; this is a performance of humanity.

My only critique would be that the structure of alternating gospel songs and book scenes becomes somewhat formulaic and predictable after about 45 minutes; luckily, the structure does shift shortly after this point. Overall, Mother Emanuel is a fantastic play about the joy of life, faith, and community, and how that is stronger than hate.