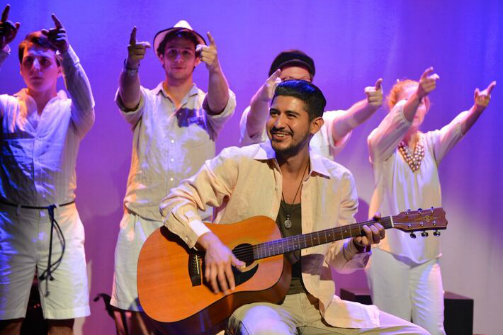 BOTTOM LINE: An evocative play with wonderful acting and beautiful sound. The source material might be a bit esoteric for some, but a good bet if you enjoy classical plays.

What if you’ve lost your wife? And what if she died to save your life? What do you do then? Thanks to his friend Heracles (Fito Alvarado), Admetos (Jeremiah Maestas) would appear to have ready answers. Heracles went to Hell, wrestled with Death, and brought back Alcestis (Ioanna Zafiropoulos), Admetos’ wife. This is initially a great relief: Admetos' love for his wife is wild, passionate, and without reason. When she is with him, the rest of the world can fall away.

Memoriam: After Euripides' Alcestis is a loosely based sequel to Alcestis, one of Euripides' lesser-known works written around 438 BC. This play, however, takes place in the relative present. To get the full back story of Alcestis, I strongly recommend that people read playwright Stephen Kaliski’s note in the program.

Kaliski’s play is full of poetic, lyrical, and vivid language. The first act is well-paced and taut. Alcestis has returned without her memories of before—she is a shell without a soul, and struggles to reclaim a life which is now alien to her. Her husband both despairs and rages that she does not remember the love between them. Her friends and Admetos pressure her to be who she was. Heracles is the only one who accepts her for who she is now, and it causes a painful and angry rift between the two men. “Go to hell” Admetos tells Heracles, and in a darkly comic moment, Heracles retorts that he’s already been there, and then gives Admetos directions.

The second act starts out strong but quickly slows down and never quite regains momentum. Certainly Kaliski does a great job showing the choices his characters make, and doesn’t shy away from the direct consequences. I just wish Kaliski had revealed Heracles’ past on stage. It’s a tragic story of violence and loss, and might shed more light on desperate crimes committed out of desperate love. Is bringing someone back to life an act of love or an act of selfishness?

Maestas, as the deeply-in-love Admetos, and Alvarado, as Heracles, are stand-outs in this very good cast. Alvarado’s balls-to-the-wall arrogance and rock-star bravado are both impressive and humorous. Maestas embodies Admetos’ fierce and tragic love for his wife. Director Elizabeth Ostler does a terrific job with her actors who expressively bring Kaliski’s words and characters to life. Composer and sound designer Steve Smith complements Ostler’s direction with a haunted, eerie, and heart-breaking score.

Eventually, Admetos finds himself making a deal with Death: Who must die now? Himself, Alcestis, or the World? For Admetos, it’s first an easy, and then impossible, choice to make. What do you do when faced with such a choice? Go see Memoriam: After Euripides' Alcestis to find out.