Lunt and Fontanne: The Celestials of Broadway 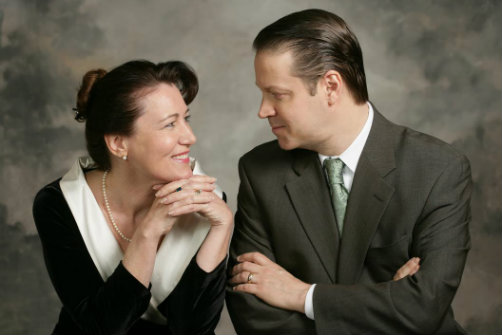 Alison Murphy and Mark E. Lang in Lunt and Fontanne: The Celestials of Broadway. Photo by M.P. Myers.

The quaint Lunt and Fontanne: The Celestials of Broadway delivers a charming and wholesome view of Alfred Lunt and Lynn Fontanne, an incredibly successful husband-wife acting duo who performed together from the late 1920s into the 1950s. We might think of them as the Audra McDonald and Will Swenson, or “Brangelina,” of their time.

In Lunt and Fontanne, Alfred Lunt (Mark E. Lang) is pictured as a neurotic, detail-oriented, sensitive man, while Lynn Fontanne (Alison Murphy) is portrayed as the yin to his yang: a brazen, enticing Englishwoman with a passion for theatre. The play hits on key events in their life together onstage and off. After their wedding, Lunt and Fontanne realized that their marriage would be a huge asset to their careers. The Broadway audiences of their day loved to see the couple’s sultry love scenes on stage, for they felt less scandalized knowing that the couple was married in real life. The two actors took the stage in many different shows, earning praise and recognition from audiences and critics alike. They even had famous playwrights penning original plays just for them. Their close friend Laurence Olivier named them “the celestials” of Broadway, and their performances in The Guardsman earned both actors Academy Award nominations. Lunt and Fontanne certainly paints a beautiful image of the couple. It even includes their tour to Europe in the middle of World War II, where they made open political statements against isolationism and put their lives at risk to bring theatre to London audiences.

I would like to think that Lunt and Fontanne would have really enjoyed this play. After all, they are written as a blissful couple with few disagreements and much success. While they obviously had more than a few starless nights and personal issues that weren't visible in their public personas, these aspects of real life do not show up in the play, leaving the characters looking a little too perfect. At times, Lunt and Fontanne: The Celestials of Broadway feels more like reading an autobiography than seeing a play, but overall the show is appealing and humorous. And Murphy and Lang certainly have undeniable chemistry, perhaps because they are a real life husband-wife acting duo, just like their characters. Lunt and Fontanne: The Celestials of Broadway certainly shines and brightens the stars of a past era in Broadway history.

Lunt and Fontanne is by Mark E. Lang. Directed by Owen Thompson. Lighting Design is by Becky Heisler. Sound Design is by Richard Frohlich.  Original Music is by Eric Gersen. Stage Manager is Candice DiLavore.

The cast is Mark E. Lang and Allison Murphy.