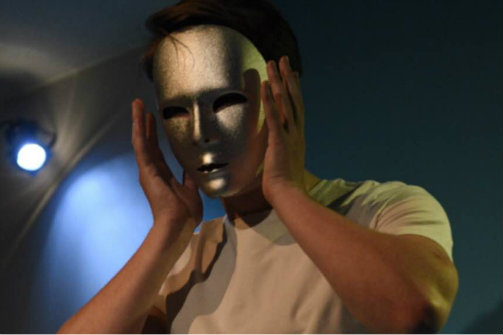 BOTTOM LINE: Fresh from the Toronto Fringe, this polished solo show about a fictional teen icon examines pop fanaticism and the trappings of fame, and asks when the zeitgeist will finally eat itself.

In the cavernous underground space at Under St. Marks, a young man stands, his breath heaving. In one hand, he holds a glittering silver mask. In the other, an ukulele. His brow furrows. Slowly, deliberately, he dons the mask. His body contorts. He crows.

Love Me Forever alternates between these three realities: Billy at the concert, Stella during a hesitant sexual encounter, and Hal speaking directly to us. True to genre, Billy (now decidedly post-teen) has decided to quit the world of pop superstardom and move to Bushwick to develop his new sound, an off-kilter indie folk somewhere between the twee charm of Kimya Dawson and the black comedy of Tom Lehrer. Meanwhile, Hal and Stella struggle to form connections in the hurried world of the near-future.

Interspersed throughout are Billy’s songs, both from his former pop life and his latest folk departure. LaVercombe is by no means a virtuosic singer or dancer, so certain numbers might raise eyebrows, particularly when sung a capella. But what he lacks in musical technique, he more than compensates for with boyish charm, impeccable timing and aching vulnerability.

LaVercombe’s creation has clearly benefited from polished direction and dramaturgy; this is not an amateurish incarnation of his conceit. The lighting and set design are perfect Fringe fare, a minimalist backdrop of three screens with colored cycles denoting LaVercombe’s character shifts. The sound design is one of Billy’s strongest elements—Adrian Shepherd has not only produced an album’s worth of original pop music, but also a whole universe of perfectly timed digitized blips, swipes, and pulses. It's stunning work.

Ultimately, Love Me Forever’s rocketing pace also proves its own worst enemy; minimal action and narrative progression make this solo show feel stretched even at an hour, and each character’s journey culminates in an overly tidy and somewhat foregone conclusion. Yet this does not detract from a show that is otherwise probing, sincere, and highly entertaining.

Love Me Forever Billy H. Tender is written and performed by Jesse LaVercombe with music by Jesse LaVercombe and Adrian Shepherd. Directed by Adam Lazarus. Dramaturgy by Guillermo Verdecchia. Produced by Jana Fredricks and Ned Moore. Choreography is by Neeky Dalir. Production Design is by Shannon Lea Doyle and Kelly Anderson. Sound Design is by Adrian Shepherd. Stage Manager is Laura Malseed.