Joey Variations: A Play With Dance 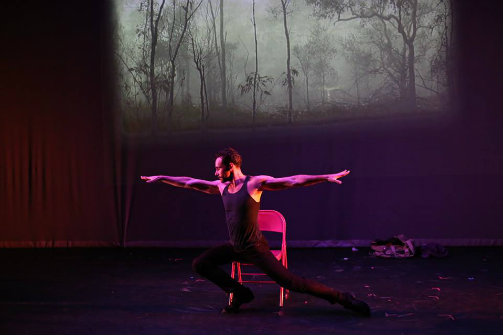 BOTTOM LINE: This tender new three-hander with dance variations examines addiction, the trauma of hate, and the path to grace and recovery.

“If I can’t dance, I can’t live.” With these words, we are plunged into the tender world of Joey Variations: A Play with Dance, a new play from writer-director Jon Spano. At the play’s opening we learn that Joey’s eponymous hero, a gay ballet dancer, has been hospitalized after a losing battle with cocaine addiction. Joey (Matthew Hardy) is unwillingly thrust into court-mandated therapy with psychologist Rita, an accomplished and level-headed trans woman. Meanwhile, he struggles to maintain his friendship with Svetlana, his dance mentor and ex-prima ballerina. Circling around a simple set of three chairs, we watch as Joey, Rita, and Svetlana slowly unfurl their histories of hateful trauma.

This quiet interior drama explodes into effusive color during four dance solos performed by the play’s hero. Joey’s dance variations, interspersed throughout the play, serve as breaks from the action that physicalize Joey’s internal struggle, rather than directly relating to the narrative. Choreographer Tom Gold has beautifully interposed classical ballet and contemporary techniques with the physical language of the play, extrapolating motions from Joey’s world to create elongated, pulsing gestures that evolve cyclically.

Gold has selected a series of lush, classical, contemporary compositions (no composer is credited) whose twinkling xylophones and piano motifs perfectly complement his use of iterative movement. Indeed, the dance variations are perhaps the most affecting moments of the play; the only unfortunate detractor from Gold’s work is the presence of a series of aesthetically jarring video projections, which crowd rather than enhance the visual field, and do little to further the storytelling.

As a dancer, Matthew Hardy is accomplished, carefully balancing relinquishment and control. Moreover, his Joey proves deeply sympathetic; with his lithe frame and jagged energy, he seems persistently ready to burst out of his skin, a physical quality juxtaposed with his self-effacing delivery and wry reverse. By contrast, while Julie Hays approaches the role of Svetlana with admirable enthusiasm, she feels miscast as a Russian transplant. Ultimately, it's Bianca Leigh who gives the most consistently compelling performance of the evening. Leigh has an effortless grace and polish, producing a convincing portrait of a woman who has overcome extraordinary obstacles to stand before you, proudly declaring “psychology is activism!”

For the most part, Spano’s play is graceful in its simplicity: expressive but succinct, riffing without being trite, political without devolving into didacticism. This is a playwright with deep empathy for his characters, whose experiences of hateful persecution are not marked by outrage, but frankness, quiet sorrow and—ultimately—triumph. Of course, Joey is necessarily hampered by some tired tropes around addiction, psychology, and the cutthroat world of ballet. Yet in certain breathtaking moments—as when Svetlana speaks of her lover’s betrayal, or Rita soliloquizes on the Latin prefix trans, or Joey performs a perfect jeté— Joey truly soars.

The cast is Matthew Hardy, Bianca Leigh, and Julie Hays.