By Isabelle Barbier; Directed by Michael Malanga
Produced by The Flashbulb Project
Part of the 2016 New York International Fringe Festival 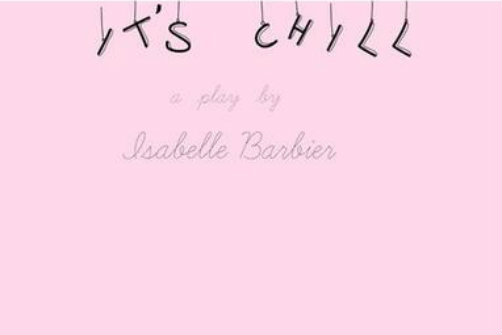 BOTTOM LINE: A new take on the millennial-relationship dramedy that examines why we pretend everything’s not as it appears.

Being twenty-four in New York City is a Sisyphean existence, sometimes. The economy screwed early twenty-somethings out of that future of two-cars and 2.5 kids, so those twenty-somethings date differently than their previous generation. In the act of trying to look composed in this life, one of the worst aspects is how often society regards our regular emotions as "childish" or as a mark of instability. When that happens, it’s easy for us to make the choice to pretend that everything’s chill.

Young post-college grads are at the forefront of Isabelle Barbier’s It's Chill, a refreshing take on the common relationship drama packed with witty banter and a wonderful structure. Sophie (Eleanore Ley with a wisdom beyond her years) has just moved in with her boyfriend Sam (Theo Maltz, who tapped into a softboy non-charm so well). Sophie wants to throw her best friend Annie (Barbier) a “grown up” dinner party for Annie's 24th birthday. But Sam hasn’t been supporting Sophie through her anxiety about their apartment and how it represents their relationship—he’s too preoccupied harboring deep feelings for Annie. Annie arrives to find that every one of her other friends have canceled and it’s just the three of them and a roast chicken—until Annie’s ex and Sam’s weed dealer, Nick (Michael Malanga who also directs the play with a great knack for orienting space), shows up without Annie’s permission.

Within the grand social argument that it’s inappropriate to have the feelings that come naturally to us as humans, It's Chill asks the tough questions, and takes the plunge into wondering when we stopped feeling and started pretending. In a beautiful scene where Annie and Sophie reminisce about their friendship, they ponder when they stopped feeling connected, and come to an indirect conclusion that they’ve been hiding under a veneer of strength, that everything is not as it seems. It's Chill reflects on the adage that the grass isn’t always greener in a fair examination of each side of the relationship coin.

Annie is devastated that Nick would show his face at her birthday when he’s behaved so poorly as a casual partner. She’s also devastated that everyone but Sophie and Sam would ditch her on her birthday. Barbier wrote Annie with a familiar vulnerability, and plays her with crystal-clear sincerity. Barbier’s dialogue is fresh: heartbreaking realities are told unabashedly, and hard truths about being a young twenty-something are contemplated in earnestness.

It's Chill has a structure that allows the play’s characters to unravel their identities, originally rooted in compelled senses of self, with a wonderful pace. Annie and her crew bottle their emotions inside, for it’s socially unacceptable for them to make their feelings known. Instead, the characters confess these anxieties in fourth-wall breaking confessionals. While this rhythm takes some getting used to, the device rounds out the play nicely.

I’m so, so impressed with this play. Perhaps, at twenty-four myself, I’m biased, but I’m thrilled to see a play that explores this suffocating aspect of our humanity so well. Barbier has such a special voice, and with its great sense of structure and rich dialogue, her play is a real winner. I hope to hear her writing for a long time.