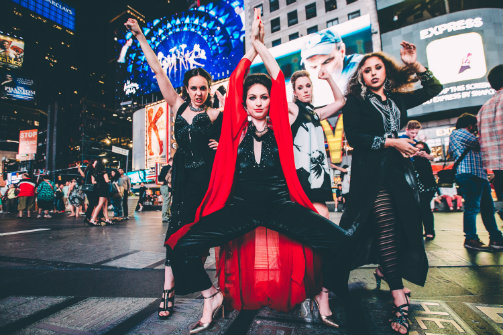 Girl Versus Corinth is billed as a musical using the Greek mythological sorceress Medea as its inspiration. Written and composed by Danny Baird, it opens with some strong musical numbers and dancing choreographed by Jelani Alladin. Tara Halpern as Medea fills us in on her ancient Greek backstory—Medea's love for Jason and how she had helped him succeed in the quest for the Golden Fleece and defeat monstrous animals, only to be betrayed by him. The voices are strong, with Halpern as the lead and a female chorus (Catherine Purcell, Anne Wechsler and Tatiana Wechsler) that immediately demands attention.

From ancient Greece, Girl Versus Corinth quickly diverges to the narratives of modern-day feminist icons as the female vocalists each take center stage to deliver a speech as a different women's rights activist: Catherine Purcell is Mary Wollstonecraft, Anne Wechsler is Betty Friedan, and Tatiana Wechsler is Rebecca Walker. During this portion, the songs disappear for a long while before making a brief comeback near the end when Michael Linden, the only male actor, sings a solo.

Girl Versus Corinth is thus more a monologue-driven show with occasional singing; it needs more music to fit into the musical genre. Catie Davis's directions and stage movements are minimal. Linden fills in as numerous male characters, but the play would be enhanced by expanding his roles. More musical numbers—perhaps as commentaries to the various plot tangents—would also help make everything more coherent and engaging.

Girl Versus Corinth is by Danny Baird Jr. Directed by Catie Davis. Choreography is by Jelani Alladin.