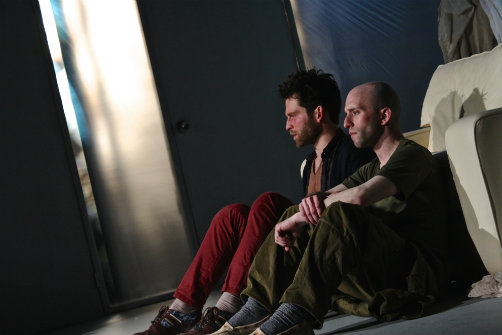 Jeff Marcus and Charles Linshaw in From the Deep. Photo by Marc J. Franklin.

BOTTOM LINE: From the Deep places two men in captivity in an imagined space, but the play’s exciting and complex premise is undercut by tired character tropes.

Two men—one an Israeli prisoner of war, the other a grad student from Boston—meet in a mysterious stark white room; neither one fully understands why they’re there. It’s an immediately gripping setup, and the themes of how we survive different kinds of violence are explored with a specificity and maturity that impressed me, especially coming from a young playwright (Cassie M. Seinuk). I only wish the rest of the play had lived up to its premise.

The American, Andrew (Jeff Marcus), is the newcomer; the IDF soldier Ilan (Charles Linshaw) has been there for five years, held in captivity as a POW. Ilan occupies his mind obsessively, advising Andrew this is the only way to stay sane and get through their ordeal. They play ping-pong, card games, make lists, draw maps—anything to distract from their realities, which come calling in the form of buzzing clocks above their personal doorways, summoning them through.

Ilan hides very little, but Andrew holds back and wallows in his obvious mental anguish. We learn that Andrew grew up in a deeply religious Christian family, that he has a close childhood friend who’s now his roommate, and that things with his girlfriend aren’t going well. Though we still don’t know the specific circumstances of his abduction, this heavy-handed foreshadowing left me steps ahead of the play, hoping that it would subvert my expectations; unfortunately, things played out exactly as I predicted.

SPOILERS AHEAD: Ultimately, Andrew reveals that he’s gay. The “troubled gay man” plot device was, a couple of decades ago when homosexuality was still taboo, a subversive and risky choice. Now, this simply comes across as trite and cliché.

END SPOILERS: From the Deep does a truly great job of bringing to life the complexities and rules of the imagined world Seinuk has created. The sound design, with incessantly ticking clocks, sets the uneasy tone for the evening as soon as the audience enters, and elements of Andrew and Ilan’s realities seep into their meeting place as they tell stories from their lives. The props—a variety of teddy bears, blankets, and other miscellaneous toys scattered around the stage—slowly reveal their dark significance. I’m hopeful that my reservations about this play are simply down to typical young-writer problems, and I’m eager to see what Seinuk writes next.

From the Deep is by Cassie M. Seinuk. Directed by Lindsay Eagle. Set and Props Design is by Megan Kinneen. Lighting Design is by Chris Bocchiaro. Sound Design is by Mischa Stanton. Costume Design is by Stephanie K. Brownell. Fight Choreography is by Rose Fieschko. Stage Manager is Erin Baglole.

The cast is Charles Linshaw and Jeff Marcus.