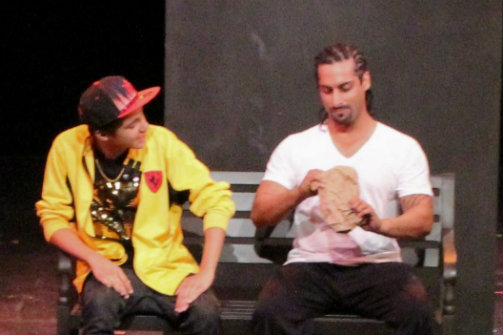 Neilson Lantigua and Hamza Zaman in Fresh Meat. Photo by A. Miyamotto.

BOTTOM LINE: The scraps of the justice system re-imagine their senses of self in this quaint drama about crime and friendship.

In this new play written by and starring Hamza Zaman, we delve into the thickets of justice, prejudice, and the will for self-improvement. Zaman, as "Junebug," is a longtime neighborhood inmate who hasn’t abandoned the basic hope that keeps him from wallowing in a quiet cell. Soon, in a bewildering twist, we meet Tony (a baby-faced Neilson Lantigua), who was sent by his father to this actual prison as punishment, seemingly to reform his misbehavior (à la scared straight). This tenure only lasts a short while before the vindictive and unredeemable guard (Warren Bub) recalls Tony from the cell. This is the same jailer who witnessed firsthand Junebug’s euphemistic threat to rape Tony, a threat eagerly made as testament to his own thuggish brutality. This is how a convict claims his bona fides, I suppose. The jailer finds this threat appealing enough to leave the school-aged Tony alone with Junebug, ostensibly to knock some sense into him, or whatever tough guys say.

After a short amount of time Junebug completely discards this chest-beating alpha-masculinity and, almost as quickly thereafter, becomes Tony’s best friend. Although for appearances sake, he readily puts the mask of gang-banger back on in the presence of the prison guard. In addition to the guard, Bub also plays the role of Tony’s father. A nebbish character, he flits around the stage in complete panic over the behavior and (literally) too-cool-for-school attitude of his son. Later in the show we are introduced to Tony’s romantic interest, Jane (Brielle Hepburn). Jane is spunky and opinionated, wrestling with the task of taming Tony or otherwise dealing with his slights and arrogance. The couple sets out to help Junebug navigate an unrecognizable world post-incarceration. Together, Tony, Jane, and Junebug meander this town slight of opportunity, helping one another face new challenges and milestones that they had been loath to face alone.

An unlikely encounter sees Tony face to face with a violent gang-banger (Vincent Vacarro) brandishing a knife. Almost as if to sneer at those moments in the movies when you cry out with plainly obvious advice, “Don’t go into the dimly lit house alone!” Tony decides to taunt the knife-wielding hulk of a man. This not only endangers his life, but once again we are gifted with florid descriptions of how the mugger will rape Jane. The play ends, in a hospital, a few scenes later. Zaman, by writing an ending which punishes the evildoers and rewards all of the protagonists, brings the play together in a tidy bow. In this way, Fresh Meat is optimistic, and makes no bones about what it hopes all convicts will achieve in that perfect world which resists our many attempts to seize it.