By Alyea Pierce; Directed by Jennifer Little; Choreographed by Allie Harris and Brandi Pinnix
Produced by Strength Out of Shadows
Part of the 2016 New York International Fringe Festival

Off Off Broadway, Spoken Word/Dance
Runs through 8.27.16
VENUE #2: Flamboyan Theater at the Clemente, 107 Suffolk Street 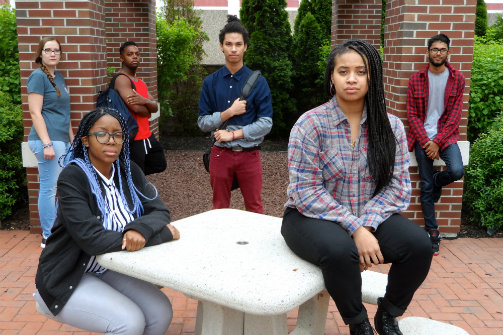 BOTTOM LINE: The steadfast heartbeat of Financial Slavery is perhaps the only force stronger than the capitalist greed driving the student debt business.

Performed by a dozen talented college-aged performers, the true accounts of Americans burdened by student debt are evocatively expressed with a tapestry of spoken word, dance, and compelling video images. Millennials have a bad rep for being lazy, whiny, entitled, and over-complaining about their student loans when “no one forced them to take the loans out in the first place.” Sound familiar? In response, Alyea Pierce’s impressive script is shutting down those accusations with a tight fist, but is yet gentle enough to invite the audience into the conversation.

Pierce’s characters are anything but slothful and passive. They are energetic, ambitious, humble, and hard-working—modeling the majority of 20 and 30-somethings out there today, who often juggle 3-4 jobs to keep up with their student loan payments. I especially appreciated how the characters represent a diverse population of college students: there’s Deric (Frederick Philp), who is harassed by Sallie Mae after dropping out due to financial strain; Sandra (Ashley Krushinski), a committed young woman following her dreams of being a video game designer despite her parents’ expectations; and Emelia (Allison Mitchell), an immigrant who is struggling to transfer her community college credits and continue her education at an affordable cost. Their unique stories are illuminated by interspersed dances, devised ensemble work, and poetry—notably Pierce’s metaphor of the 21st-century slave ship. Her passionate delivery and chilling lyrics— “those aren’t cotton-pickin’ fields, now they’re dollar-pickin’ fields”—make a bold statement comparing plantation slaves to indebted college students—“the more loans we take, the more money he (the slave master) makes.”

Borrowing traditional techniques from the Theatre of the Oppressed, there’s an interesting blend of personal narrative, media representation, and statistics that come together to create a story that resonates long after leaving the theater. The antagonistic Student Master and Financial Adviser (Akash Jilla) are both live-streamed on a projection, causing them to appear phony and manipulative—which is often the case in real life. Through clown-like physicality and vocal choices, Jilla reveals that both characters are sleazy salesmen preying on the vulnerability and ambitions of America’s young people. This creative device firmly empowers the voices of the students on stage as their honesty and innocence stand in stark contrast.

The origin of social change is conversation and the organization of communities—reminding each other that we are not alone. This practice of coming together is precisely what this remarkable production accomplishes. It is informative, relatable, and digestible. Whether you are personally affected by the crushing weight of student debt or not, you can’t help but leave the theater asking yourself: if knowledge is power and education is a human right, then why does our country treat it more like a debt sentence? What is our education worth and are we really the land of the free?

Financial Slavery: The College Debt Sentence is by Alyea Pierce. Directed by Jennifer Little. Choreography by Allie Harris and Brandi Pinnix. Co-direction and Video Direction by Michael Pinnix. Original Music is by Osaze Akejerah. Workshop Design is by Irene Kapustina. Lighting Design is by John Latona.