Each Brought Some Silences 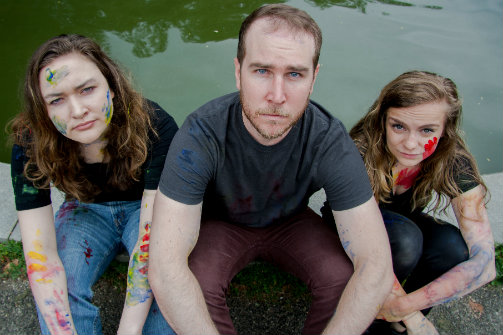 Emmy Harris, Dylan Kammerer, and Lauren Troshynski in Each Brought Some Silences. Photo by Lucy Gram.

A motley trio of convicts prepares itself for its most daunting task yet—whitewashing the Great Wall of China. Their work clothes are worn and dark, splattered with a dusty white paint that drowns any hints of color with a pale, frosty coating. The smallest, Mere (Laura Troshynski), stands atop a tiny, maroon foot ladder downstage; the two others, Mauve (Emmy Harris) and Mackerel (Dylan Kammerer), frame her. Paintbrushes in hand, they delicately paint across the space downstage with perfect precision. Though their strokes diverge into different angles and shapes, the speed and smoothness of their motions transform this mismatched crew into one working unit. Fleeting pictures of unity like this one are peppered throughout Emmy Harris’ Each Brought Some Silences, though they come few and far between.

With little recollection of how they all came together to whitewash the wall, the three characters are forced to grapple with dilemmas with implications that stretch far beyond the little time we see of them onstage: How did we get here, and what are we doing? The way that each of these criminals handles these questions paints a very different picture from the earlier vision we see of them as a team. Mauve is troubled by the hopelessness of ever finishing the wall project, while Mackerel sourly boasts his nihilism, and Mere flits along with sunny optimism.

The combined energies of Harris’ ever-grounded Mauve, Kammerer’s sarcastic Mackerel, and Trosynski’s quirky Mere wouldn’t seem like a good match at first glance, but they do manage to mesh beautifully in the breaths between the arguments. These moments are always simple pictures of humanity—moments of dancing, singing, sharing apples, and drinking coffee while huddled around in a circle. Short interludes like these are the ensemble’s life support. Otherwise, their conversations can seem stilted, chilly, or awkward. Sometimes, it’s unclear if the difficulty the trio appears to have connecting is always intentional.

Occasionally, the script falters on the side of pastiche and becomes foggy in its own philosophizing, but it’s a hearty go at a twenty-something’s coming to terms with their own mortality and seemingly pointless existence in a very random, very strange world. However, the heavy theorizing present in Each Brought Some Silences oftentimes becomes an enigma in and of itself—ironic considering it is all meant to answer questions, not create more of them. Oftentimes, it feels like the production knows a lot more information than the audience is ever made aware of.

When Harris’ work does have clarity, it is always in the simplest moments. A dainty waltz. A firm bite into a crisp apple. A gentle change of light from early-morning periwinkle blue to stark white, courtesy of Jason Fok. These bare, stripped images remind us of the bareness of humanity—that it is the little things in life that give us grounding. While these aren’t magical, cookie-cutter answers that solve all the mysteries of our existence, they are little bits of shared experiences that will give us some relief. Yet both audience and trio are still left wondering if that is always enough to get by.

Each Brought Some Silences is written by Emmy Harris. Directed by Lucy Gram. Lighting Design is by Jason Fok. Sound Design is Drew Weinstein.

The cast is Emmy Harris, Dylan Kammerer, and Laura Troshynski.