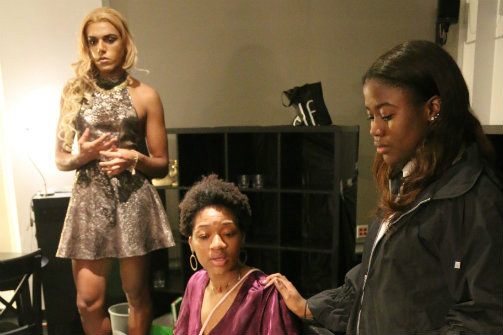 BOTTOM LINE: A play about the relationships among five neighbors and the intersection of blackness and femininity.

As intersectionality has increasingly become a buzzword in social justice discourse, it only seems natural that someone would write a play about the experience of being black and female. Or in the case of Dust to Dust: An Inherently Dark Comedy, that should be "someones"—the script is written by a five-person team, who also perform in it. Stellar acting by Raven Cassell, Lamin Leroy Gibba, Renée Harrison, Avon Haughton and Tasneem Nathari accompany a spirited attempt at theatrical art in 100 minutes.

The majority of the play depicts the interactions of one or a few characters at a time—we learn about their problems, relationships, and insecurities. However, much of the play’s action occurs in the final scene when all five cast members are on stage, and express concerns over their leases ending prematurely; this is where Yonas’ disagreements with Sun, Elissa, and Krynn over Yonas' femininity become central.

Aside from the final scene, the script offers up snapshots of lives of the characters as opposed to a cohesive plot, a dramaturgical choices that leaves the eventful final scene feeling somewhat contrived. The most redeeming moments include Haughton’s humorous depiction of his character’s insecurity over his romantic and sexual inexperience, and Gibba’s impressive impersonation of Louis Armstrong. The sound and lighting, designed by Sarah Martinez and Charlotte Durkee, respectively, are very simple. Most notably, the lighting goes off and soulful music plays in between the vignettes.

Themes of black femininity are great for a play, but Dust to Dust falls short in its efforts to address such potentially rich subject matter. Yet despite its shortcomings, the show’s cast is deeply talented, and Cassell, Gibba, Harrison, Haughton and Nathari should continue to cooperate on endeavors, hopefully writing another, more coherent play in the future.