Cyrano: A Love Letter to a Friendship 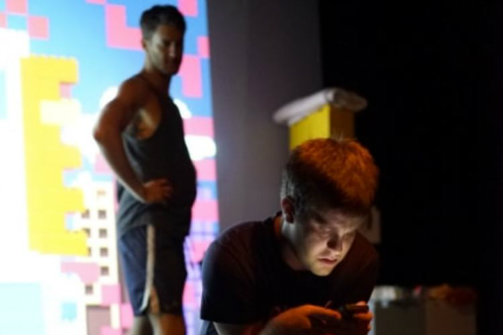 Adam Roberts and Sean Peter Drohan in Cyrano: a love letter to a friendship.

BOTTOM LINE: A gay meditation on Cyrano and the trials and tribulations of gay life in NYC.

There have been many updates of Edmond Rostand’s great play Cyrano de Bergerac but I don’t think there’s yet been one set in the gay mecca that is New York City—that is, until Cyrano: a love letter to a friendship by Sean Peter Drohan.

Those familiar with the central conceit of the source material (a love triangle between an attractive but dim suitor, the object of his affection, and the friend that works behind-the-scenes to make the suitor look smarter than he is) will recognize instantly the parallels in the play—with some strong deviations. Cyrano (played by Drohan) is a bookish nerd searching for love, all the while ghost-writing gay erotic fiction. Christian (Adam Roberts) is his hunky, dense, but sweet roommate who is infatuated with the equally hunky Rock (Judah Frank). Christian can’t understand why he and Rock haven’t had sex yet, despite the number of dates they’ve been on, and gets befuddled by Rock’s text messages pontificating the meaning of the novel Candide. When Cyrano, posing as Christian, responds intelligently to Rock’s texts, it seems as if Rock finds a new dimension to what he thinks is the not-just-a-himbo Christian. This is pretty much where the Cyrano comparisons end.

For it seems that Cyrano may actually have a thing for Christian—though that’s a bit confusing as he also seems to have a thing for Rock, and also for the multiple sex app partners he hooks up with offstage. It’s a novel idea to explore the romantic complications of Rostand’s play through the lens of gay men today, and Drohan and director/choreographer Eamon Foley succeed at times in capturing this confusing and often alienating world. With online dating allowing anyone to pose as someone else or hide their true personality behind a well-taken photo, there are some very fitting parallels to explore. However, Drohan seems more interested in exploring the theme of friendship in this world (as per the play’s subtitle) and this often is at odds with some of the plot elements he creates.

Foley’s athletic staging highlights the dance backgrounds of Roberts and Frank, and the actors are gung-ho, leaping with abandon into their characters. Drohan himself is especially unafraid to show the ugly sides of Cyrano. Special recognition must be paid to Jason Lee Courson, whose set made entirely of large legos is as inventive as his extremely professional videos that play throughout the show—for a Fringe production, these elements are especially top notch.

Cyrano: A Love Letter to a Friendship is by Sean Peter Drohan, based on the play by Edmond Rostand. Directed and Choreographed by Eamon Foley. Set/Projections Design is by Jason Lee Courson. Lighting Design is by Wesley Cornwell. Music Supervision is by PENNYWILD (Penny Wildman).