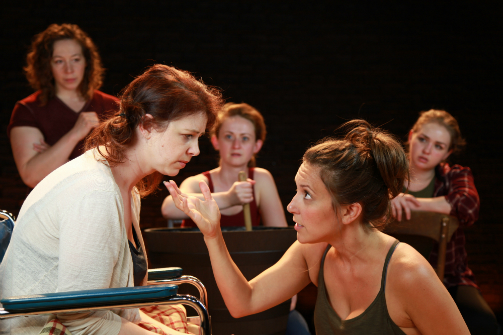 BOTTOM LINE:  When six sisters are given a stranger and a surprise reunion, you get an evening of unbridled chaos that tests how much they're willing to sacrifice for each other.

No family is perfect, but some are more imperfect than others. The six sisters in Scott T. Barsotti’s Brewed have deep-seeded resentments that have been simmering for years, resulting in a darkly comedic dysfunction. However, the unresolved conflicts come to a roaring boil when one of the sisters plans a reunion and introduces her girlfriend, exposing an outsider to the roots of their flawed relationships.

Upon entering the theater the most prominent piece is the cauldron sitting in the middle of the stage. Throughout the show someone is always stirring the pot, each person passing the job to the next in a choreographed ritual which ensures that whatever is in there is always moving. Though the job seems to fall mostly on the blunt and anger-prone Paulette (Rachael Jenison). There is also Nannette (Alexis McGuiness), now a famous racecar driver who’s never around. Juliette (Aubrey Saverino) is the parental figure who is the resident expert on how to either put the others in their place or calm them down. In fact, she seems to be the only one who knows how to take care of the ever-demanding Babbette (Danielle O’Farrell), whose mood and health seems to be directly tied to the pot. Collette (Stephanie Roetzel) tries to help, but she’s usually trying so hard to prove how tough she is that she just ends up kindling Paulette’s rage.

Then there’s Roxette (Vivia Font), the genius engineer and well-meaning sister who comes up with the plan to introduce her girlfriend Lee (Deb Radloff). But in meeting the sisters, Lee is introduced to far more than she bargained for, including the secrets, resentments, fistfights, and witchcraft that has defined them. Roxette, as always, had good intentions, but little does she know that bringing Lee home will have tragic consequences.

Barsotti’s intriguing script is brought to life by heartfelt performances. The cast works off each other so organically you could believe they are sisters. Claire Warden’s purposefully ungraceful fight choreography also helps set the dark and raw tone of the show. Some moments feel like the actors are actually brawling on stage. And considering the number of actors on such a small stage, Jessi D. Hill's direction uses the space wisely—though there is always something going on in every corner, it is always clear where your focus should be.

Brewed is certainly a valuable contribution to the growing trend of majority female productions (including both cast and creative team). Having female characters who shamelessly expose their flaws and their violence is an exciting defiance of gender roles, yet the show feels slow, at times painfully so. Sometimes Brewed drags so much even some fight scenes feel redundant, which is a pity considering the amount of work that clearly went into them. Perhaps in trying to develop the show's many characters, the plot's momentum falls by the wayside. Brewed has a voice to offer in discussions of feminism and women in theatre, and I look forward to seeing where it goes next.

Brewed is by Scott T. Barsotti. Directed by Jessi D. Hill. Fight Design is by Claire Warden. Lighting Design is by Daniel Loveridge. Sound Design is by Miles Polaski. Costume Design is by Grace Trimble. Stage Manager is Deidre Works.