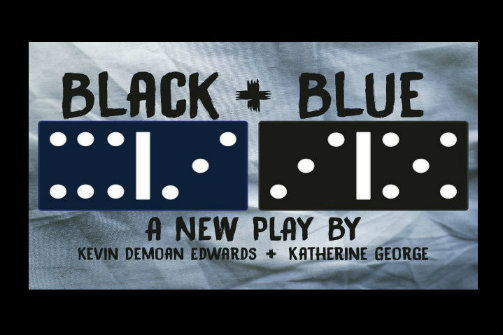 Early in Black & Blue, a TV news reporter addresses the audience, telling them that an unarmed black man has been shot and killed by a police officer in Brooklyn. It’s a heavy moment, setting the tone for everything that is to come. What’s fascinating about what follows is that it isn’t so much concerned with the incident itself, but with it's aftermath and the lives affected. The shooter and the victim barely figure into the story at all. This act of violence serves merely as the inciting incident.

The story proper centers on four characters. Mark (Ty Gailloux), a grad student and cousin to the man who was killed, is married to Maya (Mildred Victoria), a nurse. Kristen (Emma Tracy Moore) is Maya's co-worker and friend, and is married to a police officer, Mike (Chase Burnett). Through these characters, and their ever-shifting dynamic, Black & Blue explores the issues of police shootings. And it is very much an exploration, not a polemic. The story burns with a sincere desire to figure out just what is going on in this country, and what we can do to fix it. Kevin Demoan Edwards’ script has a light touch, delving into these issues skillfully with real insight and nuance. Care is taken not to make obvious who is right and who is wrong, to a degree that may frustrate some audience members. Each scene plays out almost as a vignette, centered around a particular theme explored in a conversation, while still advancing the larger plot and themes. It’s great, subtle writing.

Interspersed throughout, the actors read poems by Katherine George, often at the conclusion of a scene. These are well-written and delivered, but always feel a bit tonally off, perhaps because they don't seem written with these specific characters in mind. Their voices and vocabularies change. The poems are enjoyable in their own right, but I was always eager to get back to the story.

What I especially appreciate about Black & Blue is that though it is nuanced and measured in its messaging, it nonetheless forms a clear thesis about violence in America in a way that is optimistic but also realistic. The play never takes the easy way out. There are moments when we seem to have a resolution, but it turns out to be temporary and fraught. The story’s climax makes a choice that risks melodrama, but ultimately fits nicely into the established themes. There’s a majesty to the final ten minutes of the show that I found deeply moving.

Of course, when dealing with such a raw wound, it’s impossible to please everyone. Some will find the conclusions of Black & Blue easy or naïve. I found it beautiful, human, and full of truth.