And Then: A Science Fiction Folk Event

By the Ensemble; Directed by Will Davis; Choreographed by Leanne Velednitsky
Part of the 2016 New York International Fringe Festival 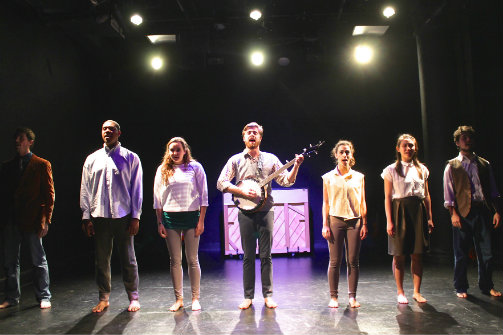 BOTTOM LINE: A perfect harmony of the unlikely combination of time travel and folk music.

It’s been a long time since I’ve left a show feeling that all is going to be OK in the world. It seems as if there is an omnipresent nihilism to so many shows: how horrible we treat each other, how awful things are, how doomed the human race is. The simple yet thrilling And Then: A Science Fiction Folk Event deals with these ideas but finds a way to remind us that by dwelling on the negative, it is so easy to neglect the positive.

The premise of the show is that sometime in the future, two synthetic beings, Carter and Alex, receive a mysterious mission via recording to figure out the purpose of humanity. They will keep living on and on, regenerating in new bodies, until they reach their conclusion and figure it all out. This is where the science fiction of the title lies. Interspersed with scenes of the various Carters and Alexes (each member of the fantastic cast takes on one of the roles at some point) are original songs, written by creator/director Will Davis and Vincent Cinque) and performed by the cast. This is where the folk aspect of the title lies.

The combination of science fiction alongside folk music does not seem immediately complementary. But this is where the brilliance of this piece comes. Folk music is, at its heart, a music of the common folk, of all people. It tells stories of where we’ve been and where we would like to go. The songs in And Then… both comment on the scenes but also meditate on the evening’s various themes. Not only are the songs well-written and performed, but they are woven so beautifully into the fabric of the play that the piece takes on an elegance not usually associated with Fringe shows. The music is the heartbeat of the show and whether accompanied by piano, banjo or cello, or danced to with Leanne Velednitsky’s athletic and haunting choreography, it does what folk music is supposed to do—carry its listeners both backwards and forwards in time all the while reminding us of the present.

Davis’ direction is simple yet highly effective and, when paired with Kelly Shih’s evocative lighting design (relying heavily and ingeniously on LED lanterns) and Audrey Ketchell’s timeless costuming, perfectly transports the audience across time and space. With a cast of young actors it would be very easy for a piece like this to slip into either ironic or cloying territory, but under Davis’ direction and the fine cast, the tone is consistently hopeful and honest.

The show opens and closes with the idea that “one hundred years from now, let’s hope we get some problems figured out.” After spending an hour with this group, for once I felt that we’re in good hands and things will indeed be figured out.

And Then: A Science Fiction Folk Event is by the Ensemble. Original Music is by Will Davis & Vincent Cinque. Directed/Created by Will Davis. Choreography is by Leanne Velednitsky. Costume Design is by Audrey Ketchell. Lighting Design is by Kelly Shih. Stage Manager is Ryan Hudzik.