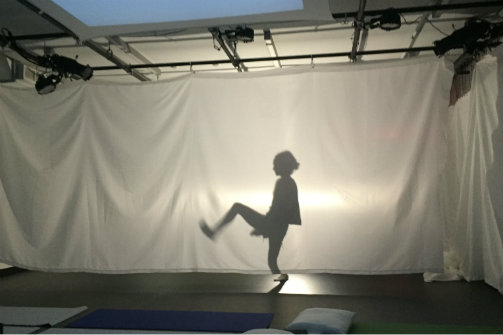 Ilana Simons in All Together Now. Photo by Patrick Harnett-Marshall.

BOTTOM LINE: An intelligent, meandering, and captivating examination of the psychology of a psychologist; a unique combination of introspective projections and live reminiscences and pontifications.

In All Together Now, the audience lies down on white yoga mats with white pillows in a space enveloped in white cloth. A subdued, dreamlike film centered on the life of Ilana Simons, the show’s creator, plays on the ceiling and one wall. The film focuses on Simons' family, love life, and ever-evolving conceptions of herself; it employs animation interspersed with live-action scenes and interviews. Meanwhile, Simons lies in the middle of the room and comments on the film.  The piece does not make complete use of the entire space the way that much immersive work does, but it nonetheless allows the audience to feel welcomed into a self-contained world.

In addition to being an artist (whose primary medium is film), Simons is a clinical psychologist, a fact made evident by the insightful nature of her spoken contributions to the work. In fact, the whole setup is reminiscent of psychoanalysis: the filmed material seems to be a visual representation of Simons’ unconscious, which she tries to describe and make sense of as if she is a patient. This places the audience in the therapist-like position of being invited into her inner life and bearing witness to it. Though a background in psychology is by no means required in order to understand or appreciate the piece, those with some interest in the subject are likely to get the most out of it.

All Together Now is well-crafted, sophisticated, and at times lovely—such as when Simons uses her own live body as a kind of shadow puppet. It is a deep exploration with a vague arc rather than a forward-moving narrative, and it washes over you rather than confronts you. It is more similar to experimental visual art than it is to most theatre, containing notes of Marina Abramović (the setup of the room) and Laurie Anderson (the film). Like much art of this nature, All Together Now is poignant, if a tad self-indulgent.

Though formally excellent, the show's content fell short of my expectations: its stakes seem low. The underlying questions it considers—of what it means to be in relationship to oneself and others—are relevant to everyone, but they are not presented in a way that feels pressing. As I watched the film and listened to Simons’ voice, I kept waiting for a revelation that never came regarding what made her life extraordinary. I sensed the importance to the artist of the material at hand, but was unsure of what made it important to the audience. The performance has an exciting intellectual and aesthetic charge, but I wanted to be pulled further emotionally into Simons' personal experiences. The piece also has undertones of oversharing, which Simons acknowledges when she states “I’m…an exhibitionist because I’m compensating.” It is a great credit to the artist that the production exhibits self-awareness not just in this way, but on multiple levels, without being campy or even really theatrical at all.

The most intriguing aspect of the performance is the juxtaposition of the film with Simons in the flesh. Her presence in the room feels strange, since she does not make much use of her body, but instead mostly analyzes her own film out loud as it plays. This spoken analysis sometimes detracts from the piece—it was as if it kept jarring me awake from the dream of the film. For example, I would have rather figured out for myself that Simons' current relationships with men are informed by her family dynamics. Having this bluntly pointed out threatens the craft and intricacy of the images. As a result, All Together Now evokes feelings akin to what I imagine a therapist might feel when analyzing a fellow psychologist like Simons: grateful to be taken along for the self-analytical ride, yet frustrated by how little work one is doing.

On the other hand, some of Simons’ observations do heighten the experience. Simons brings up the psychological phenomenon of projection during a part of the film that is especially full of shadowy images; I’m not sure I would have made this connection myself. Also enjoyable is the contrast between her intellectual insights and some of the more down-to-earth moments in the film, such as an oversized penis sculpture made of wet, sloppy clay. The performance turns even more fascinating in moments when Simons' remarks give way to anecdotes.

Though the live commentary placed together with the film has mixed effectiveness, this certainly is an original structure. The presence of Simons’ live and filmed selves also adds another layer to her self-awareness and admission that she performs herself even as she searches for herself. In the same vein, I really appreciate her overall ability to take an unflinching look at her life that does not veer too far into either self-aggrandizement or self-pity.

On the whole, All Together Now is a solid introduction to the realm of experimental performance for those new to the genre. For those more familiar with immersivity, multimedia shows, performance art, or art films, the show will seem more (though not entirely) conventional, but nonetheless quite compelling. Look elsewhere in the Fringe Festival for an explosive, plot-heavy, or commercial-feeling experience, but anyone who appreciates subtle beauty, whimsy, and wandering complexity will find much to marvel at and mull over in All Together Now.

All Together Now is written and performed by Ilana Simons.