A History of Servitude

Off Off Broadway, Clown/Masque
Runs through 8.27.16
FringeLOUNGE at the Clemente, 107 Suffolk Street 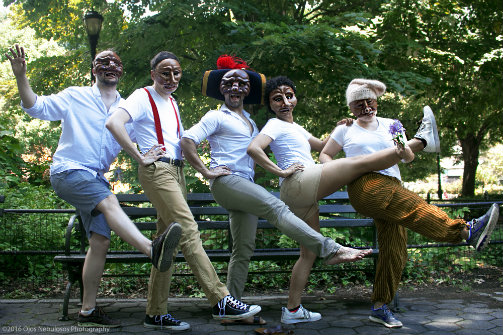 BOTTOM LINE: Playing in the slapstick style of commedia dell'arte, The Department of Fools’ A History of Servitude is an hour-long romp that retells history from the perspective of the servants.

The premiere of The Department Fools’ A History of Servitude did not come without its requisite production hiccups (and then some). The scheduled curtain time was set for noon on what was supposed to be the hottest day of the summer, in a community garden that offered shade only at the outskirts of the seating area. The production team did their best by handing out a few much-needed umbrellas, but even so the audience was gearing up for what was looking like a long and hot sixty minutes of comedy.

Then the venue changed.

Due to some last minute mix-up, the performance was pushed back 45 minutes and moved to a tent in the Clemente's FringeLOUNGE: a bustling epicenter of festival activity. Yet in spite of the setbacks, the cast pushed forward in true commedia fashion and delivered a uniformly entertaining hour of comedy, displaying incredible adaptability and cool-headedness even in the blistering conditions.

Full disclosure, I’m a sucker for this kind of comedy. Commedia relies on cartoonish, archetypal characters (denoted by different masks and physicalities) to create partially scripted, partially improvised scenarios. Subtlety be banished! This style is about big physical choices and ham-fisted one-liners, so if it’s a light touch you crave, this show may not be for you. In A History of Servitude the scenarios fall under an overarching theme: the world’s history from the perspective of the servants and slaves. In a particularly inspired (yet unabashedly corny) vignette, two slaves discuss the traffic on the Nile while moving pyramid blocks back and forth from either side of the stage. When their task-master tries to help, it's “You give the block to me, I give the block to you, you give the block to him.” The three work tirelessly to no effect, handing each block back and forth to each other ad absurdum. Is it the most intelligent humor ever? No. Is it funny? Absolutely.

As with any comedy show, not every bit hits equally as hard. One common symptom here is allowing the antiquated style to give way to some antiquated (or at least passé) jokes. In 2016, I don’t think two men accidentally appearing to have sex with each other is quite as scandalizing as it was in commedia’s heyday in Renaissance Italy. Generally the sexual humor, perhaps sprinkled throughout for its supposed shock value, falls flatter than the moments of good old clown-school schtick, and the more inventive reversals of actors dropping character completely to “live their dream.”

On top of all of the show’s merits, A History of Servitude is part of the FringeAL FRESCO series (read: FREE). The cast plays wonderfully together and cultivates a genuine sense of fun amidst all of the theatrical conventions. I would recommend it for anyone looking for a comedy in a different style, or for anyone who’s spent a little too much time indoors throughout this summertime festival. Future performances are slated to be performed at the updated location at the FringeLOUNGE. Now that the company’s had some time to settle into their new digs, I have high hopes for what they can accomplish.

A History of Servitude is written and performed by The Department of Fools. Masks by Jonathan Becker.