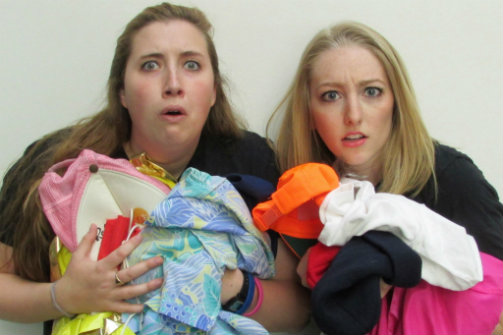 Nerf guns, sock puppets, original raps, and a character played by an actual camera tripod—all things that come to mind when you think Shakespeare’s A Comedy of Errors, right? Olivia Atwood and Maggie Seymour, writers and stars of 15 Villainous Fools, would say so. In their 70-minute retelling of the classic comedy, Atwood and Seymour play fifteen different characters and intersperse the Bard’s words with their own to create a raucous, fast-paced journey through the classic problem of confused twins.

In short, two sets of twins separated at birth—Antipholus and Dromio of Syracuse and Antipholus and Dromio of Ephesus—unwittingly meet, and through mistaken identities, supposed adultery, and accused theft, the characters are led to the play's conclusion where we find out that there have been twins in our midst all along. Atwood and Seymour attack the exhaustive task of telling the story by themselves with clockwork precision. Synchronous movements, interwoven lines and original raps, and plenty of improvised dialogue show just how well the show has been rehearsed. These women know their show, and each others’ comedic timing, like the backs of their hands. This should come as no surprise, seeing as Atwood and Seymour have taken their show to five Fringe festivals across the country (in Maine, California, Washington D.C., and Rhode Island) this summer, finally landing here in New York.

Oddly enough, if there is one issue with the show, it may be that amount of rehearsal and repetition. Some portions, namely right at the beginning and right at the end, are flown through with such familiarity by the performers that I found myself struggling to keep up as a first-time audience member. In the middle section of the show, however, the ladies really hit their stride at a pace that is much easier on the ear and the mind, and I found myself laughing out loud and forgetting the earlier fly-by. The love scene between Seymour’s Antipholus of Syracuse and Atwood’s Luciana is a highlight of the play, including a pop culture love montage paying homage to Titanic, Love Actually, and The Princess Bride among others. So is the “failed dance break," in which stage manager Axis Fuksman-Kumpa plays double duty in both running the show and being in on the fun. The minimal set—a few acting blocks, a changing curtain, and an easel—is handled wonderfully.

Whether you know Comedy of Errors or not, you’ll be sure to have a blast with these two wonderful clowns. As the ladies say in their description of the show, “Come for the killer original raps, stay for the mediocre puppetry!”

15 Villainous Fools is written and performed by Olivia Atwood and Maggie Seymour, based on The Comedy of Errors by William Shakespeare. Stage Manager is Axis Fuksman-Kumpa.