Why I Killed My Mother 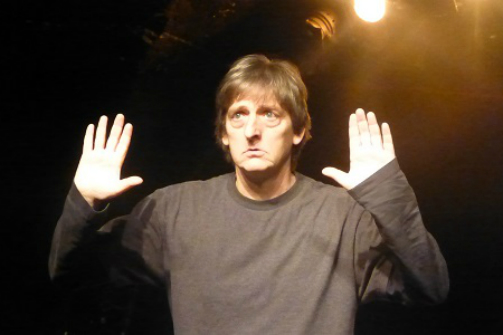 Dor Zweigenbom in Why I Killed My Mother. Photo b y Yaakov Bar On.

BOTTOM LINE: Why I Killed My Mother is a creative autobiographical one-man show.

One man stands on stage for an hour, telling the story of why he killed his mother. That same man pantomimes, sings, dances, argues with himself, interacts with the audience, and use his shoes as puppets. This is Dor Zweigenbom’s Why I Killed My Mother.

Alone on stage, Dor takes us through his tumultuous childhood. His father and alcoholic mother divorced when he was 8 months old. His mother remarried an abusive man. His mother often deserted him and his younger sister at a motel in Las Vegas while she went out to gamble and drink. He and his mother then didn’t see each other for 25 years. The climax of the show is a scene later in his life where he made his mother admit that she hates him. And then he killed her...as far as we know.

Dor takes on this difficult and personal story with applaudable creativity. He not only plays himself, but also his grandfather, his mother, his step-father, his sister and various other characters. The distinction between characters is clearer in some scenes than others but is interesting to watch nonetheless.

I found the shoes-as-puppets scene to be the most intriguing of the bunch. He begins by performing a simple magic trick where he switches his own blue converse for those of his 15-year-old self. He then pulls two small pink shoes out of a desk to represent his younger sister and finally, a single red (drunk) stiletto represents his mother. Watching him make the shoes talk to each other felt like watching a young kid play with dolls or action figures. It gives the whole scene a sense of immaturity that helps us understand why his 15-year-old-shoe-self runs away at the end of the interaction with his stiletto-mother.

While I enjoyed watching Zweigenbom's different talents, I found that the transitions between each section weren’t always clear and smooth. Each style could have been matched a little better to the section of the story that was being told. I found too that the technical elements and music weren’t always necessary and either didn’t add much to the scene or took away from it. Simply the performer on stage would have been enough for me.

As with many autobiographical pieces, it was hard to tell at times what was true and what was fictionalized. However, at the end of the piece, I left the theater feeling that I had shared in a true, intimate and brave moment in this man’s life.