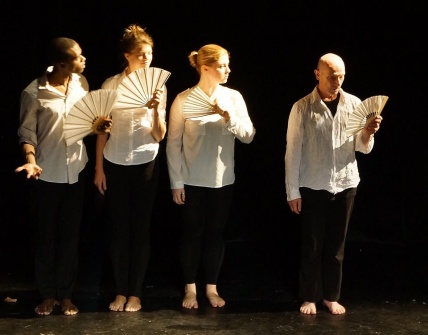 The Weird Tree begins as the audience filters into the house. Slowly, the five ensemble members enter the space with the crowd, swaying slightly to an eerie soundscape. Once everyone is settled, a voice-over introduces us to the contextual frame of the piece: a Slovenian fairytale. In a kingdom far away grows a giant tree, its boughs so far above no one has ever seen them. The king declares that whoever reaches the top of the tree and returns with its fruit will marry his daughter and become heir to the throne. Many try, many fail, until one man with metal claws on his shoes, succeeds in reaching the lowest boughs. Instead of fruit, he discovers a castle containing three princesses. There begins the action of the play, and we follow "Man" on his journey through a series of castles, as well as the Houses of the Sun, Moon, and Wind.

As the story progresses, each cast member takes a turn embodying the character of Man. The text—a collaboration between director Peter Petkovsek and playwrights Tingying Ma, Jocelyn Shratter, and Laura Zlatos—is gorgeous and layered. The ensemble speaks simultaneously, creating urgency and immediacy through the cacophony of their voices. The sound design—including original music by Peter Zargi—is well-composed, and well-executed (no small feat for a festival show). The ensemble is generally strong, with particularly notable performances by the elegant Ken Jackson and the spirited Grace Denoncourt.

The most effective element of The Weird Tree is its rejection of a strictly linear narrative in favor of a rapid cutting of images, sound, and language. I am always thrilled by work that releases itself from the grip of logic to fully embrace the abstract and nonsensical; The Weird Tree does this with enthusiasm. Although there are a few early moments where the direction falters—namely, an ill-conceived rape scene—the piece gains strength and traction moving forward. The audience is led through a series of distinct worlds, expressed as brief vignettes containing physical movement, text, and music, ranging from classical to folk to electronic. The result is a terrific rush of unpredictable surprises.

Part fairytale, part social commentary, and part absurdity, The Weird Tree bravely and refreshingly aims toward something bigger than itself. If you believe, as I do, that theater should push the boundaries of reality, devise wild ambitious experiments, and reflect the unknowable depths of the human spirit, then The Weird Tree will not disappoint.