By Sean Murphy, based on works by Anton Chekhov; Directed by Katie Falter
Part of the 2015 New York International Fringe Festival 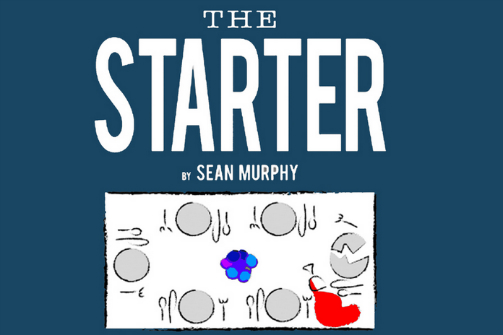 BOTTOM LINE: What starts out as two exes having dinner turns into a snafu of a dinner party.

In The Starter, based off of Chekhov’s Platonov, Anna (Tori Hidalgo) returns to her hometown after her fiancé is killed in a drunk driving accident. Also residing in the same town is her ex, Parker (Harry Percy Sanderson), who she still has feelings for. He has since gotten engaged to Jennifer (Haley Jones), a girl straight out of the Old South with enough perkiness to light up the Empire State Building. Upon seeing each other for the first time, Anna pleads with Parker to break up with Jennifer and take her back. Parker, of course, is dead set against it but does suggest that Anna come over for drinks the next night.

She arrives at Parker’s new house thinking it will just be the two of them, but then comes face to face with Jennifer. Caught totally off guard, Anna hightails it to the bathroom where she calls their old friend Trevor (Sean Murphy) and invites him and his girlfriend Gretchen (Mary Kate O’Neill) over along with her late fiancé’s brother Stephen (Eric Folks) and his wife Sophie (Lauren Friednash). Already off to a shaky start, the night continues to sour when tensions between friends run high, and old feelings are revealed.

This “dinner party” is the definition of "disaster." During the night, everyone reveals their own personal issues, and it is not pretty. For starters, there is the love triangle between Parker, Anna and Jennifer. As moody and rude as Anna is, she seems much more desirable than the overly perky Jennifer, who you want to hit on the head with a bat. Parker himself is not that bad, until you learn that he has been cheating on Jennifer already and has also struck it rich after selling a website he created.

Trevor and Gretchen seem like the extremely odd couple with Trevor blurting out one-liners constantly and Gretchen barely saying the word. It makes it more sense when Trevor lets it slip he loves Anna after one too many drinks.

Sophie and Stephen are clearly on the verge of divorce. Stephen’s brother’s death forced the pair to move away, and now they are living with Anna until they find their own place. Stephen still loves Sophie, but his solution to their problems is to have a baby, an idea which Sophie is not willing entertain.

With all this drama in one play, there is a lot of information to keep up with. The pace is kept quick and dramatic so there is never a dull moment. But even with all the theatrics between the couples, we are left wanting more information about each one. Personally, I would love to see the character of Anna developed a bit more just to give her more depth and backbone. The Starter is an interesting take on Chekhov. With a modern twist, it is easily relatable for millenials and thirty-somethings.