The Screenwriter Dies Of His Own Free Will 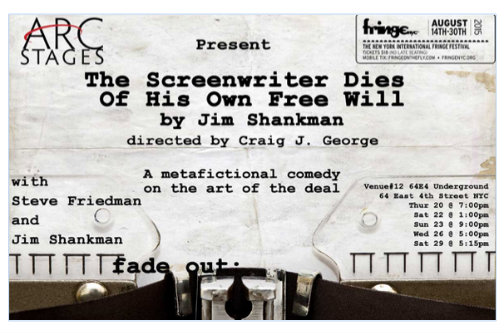 BOTTOM LINE: A speedy comedy about the mind games that help you succeed in Hollywood’s screenwriting scene.

In Jim Shankman's The Screenwriter Dies Of His Own Free Will, blockbuster writer Willy Shotz (played by Shankman) tries to get one last script produced by his old Princeton pal, Hollywood hotshot Gabe Weiner (an energetic Steven Mark Friedman). Dead college feuds revive, and pride gets in the way of either party getting what he wants, which may be as simple as an amiable reconnecting of old friends.

But Shankman’s play never gives into this lofty idea. Instead, Screenwriter stays grounded in its entertaining one-upmanship and witty asides that show Willy and Gabe’s frustration with the other. Late in the show it becomes comically surreal when the one suspects that the other is also talking to (and maybe bribing) the audience.

At only 45 minutes, the back and forth antics never get repetitive, and the buoyant actors help the comedy clip along. Shankman’s dialogue is often inferior to his acting; some jokes fall flat but they pick up as the show progresss. Still, Shankman’s effervescent performance keeps Screenwriter moving along briskly.

Director Craig J. George also helps guide the pace with his simple staging and sound cues that create locations from a bustling Los Angeles street to the insides of an office. George also makes good use of the sparse set—the two chairs double as seats, doors, and an elevator. However, in 64E4 UNDERGROUND's corner stage, where the audience sits on two sides of the action, George's blocking does tend to favor one side over another.

None of this ever distracts from an otherwise entertaining piece performed by actors who are clearly having fun. In a small house, Shankman and Friedman’s direct addresses help include an audience struggling to choose which goof’s side to take. There are no frills in Jim Shankman’s nimble comedy. Instead, the fast-paced dialogue and quickly shifting power dynamics fulfill more than spectacle ever could.