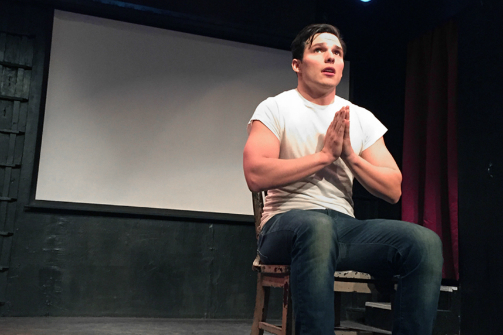 BOTTOM LINE: Anthony Sneed puts on a great one man show full of some bizarre twists and turns in his autobiographical coming of age tale.

Going from an awkward JNCO Jean and FUBU shirt-wearing youngster with dyed blond hair to a boy so desperate to be cool that he brings a gun to school, Sneed shares his growing pains with us in a way that brings out the best in his storytelling ability. There's not a single person he shies away from impersonating, most noteworthy of which is a Christian rapper who does some impressive tongue twisting maneuvers. Along with his varying accents and attitudes comes a few hilarious artifacts from his teenage mind, straight out of his time capsule.

Free of all secular materials except for a Source Magazine, which he eventually tears up to make his transformation to born again Christian complete, Sneed embarks on farm life with gusto and starts milking cows while his uncle shows him the glory of God-praising death metal. As far as punishments go, being sent to a Christian boot camp was much more than his single mother bargained for, as Sneed had an awful experience with an emotionally and physically abusive pastor. It is to his credit that even this didn't leave a sour taste in his mouth because he looks back at his life with a sincere gratitude for the lessons he has learned and the experiences that have shaped him. Although farm life starts to agree with him, and the excitement of an arena filled with Promise Keepers electrifies our hero, his inevitable return home looms, giving the play a clock ticking element, with his mother being the only one who can really save him.

The show is short and sweet, never lagging, and always action packed. With some deft work on sound and lights, the show moves along at a brisk clip, showing only the highlights of a difficult and often ironic trip through young adulthood. The scoring offers some variety to the piece and allows Sneed to even do a decent musical number. If it ever gets stretched to a longer duration, it might be nice to see the high school years too.