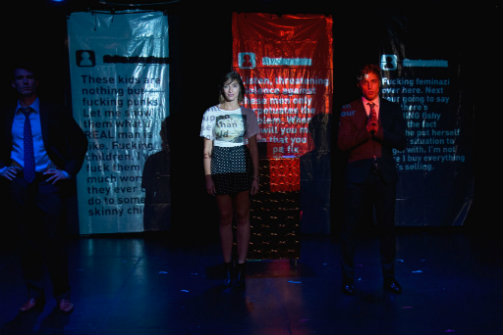 BOTTOM LINE: A dark, captivating exploration of the realm of obsession and control, as it pertains to current events and mass media.

The question, projected crudely across the sterile sheets of plastic adorning the upstage curtain, is the first image you'll be presented with when you go to see The American Play, written by Ashley J. Jacobson and directed by Darren Johnston. This is a play which asks, forcefully, that each audience member take a good, hard look at who they are and how they interact with tragedies in the real world. The creative team bolsters the strength of this question with deft use of design in the staging of their production.

From the top of the show, we're strung along through a broken sequence of interviews and examinations of the three main characters, interspersed with snapshots of their lives in the days leading up to the fateful night around which the story hinges. We don't know exactly what happened on this night right away, but clues are cleverly strewn about the narrative for those looking to find them.

Immediately, we begin to paint the pitiful, and somewhat disturbing, picture of Tim (Michael DeBartolo), a college student who has taken the brunt of more than his fair share of bullying and abuse from the bigger, tougher guys in his life. He spies and quickly latches onto Luis (John Charles Nagy), who Tim equates to his literary hero, American Psycho’s Patrick Bateman, due to his powerful presence and his domineering attitude towards life. The dynamic between these two fast “friends” is the subject of much of the action of the play, as Tim stumbles over his own overwhelming sense of inadequacy, trying to grasp the power and control in life that Luis seems to attain so effortlessly.

Their relationship is weakened, however, by the introduction of Shelly (Jen Jacob), Tim's friend from high school, and the painfully obvious sexual tension and conflict of interests between all of them. The three characters downwardly spiral into each others' lives as they find themselves much further down the rabbit hole than they intended.

Tim's descent into his own ego is punctuated, carefully, by the inclusion of third-party anonymous tweets (or some equivalent fictional social media tool) where anonymous contributors weigh in on the aftermath of these events, as information about them spreads across the Internet.

These tweets do a lot to help articulate the world of the play, as the scenes themselves show us only isolated moments between the characters really involved in the action. The tweets remind us that this is a world where the truth is often swept under the rug in favor of a more thrilling narrative to fuel the mass media hysteria that is so prevalent in the modern world.

Though witty, and sometimes hilarious in the anguish of the whole affair, The American Play is a dark examination of a serious issue mirroring hundreds of thousands like it taking place all the time. This may not be the show for you if you are triggered by physical violence, emotional abuse, or rape. That said, The American Play is an important piece of theatre, not because it broaches a difficult issue, but because it goes to great lengths to demonstrate the greatly varied number of perspectives that can emerge around those kinds of events.