Off Off Broadway, Play
Runs through 8.28.15
VENUE #2: Flamboyan Theatre at the Clemente, 107 Suffolk Street 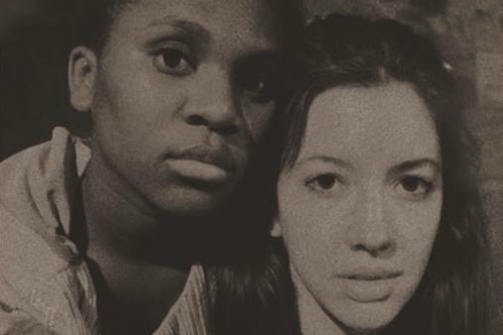 BOTTOM LINE: A hopeful and important piece of art that reminds us of our humanity.

Th’ Burning is inspired by a familiar, somber story. On Mother’s Day in 1961, two integrated buses carrying Freedom Riders were sent into Anniston, Alabama. A mob was gathered waiting for their arrival, tensions flew and the first bus was firebombed. Many were killed onboard; others were beaten as they tried to escape.

But Th’ Burning is not a history lesson. It is, instead, a lesson on humanity, struggle and triumph. Anniston in 1961 is the backdrop for this play with music, but the story, written by Susan McCain and Jason Wright, is seen through the eyes of Liz (Brittany Harris) and Jo (Amina Johnson), two young friends—one white and one black—navigating a world born out of chaos. It is also seen through the eyes of their mothers, by the two preachers of the opposing forces, by the forces separately and by the group as a whole.

What McCain and Wright have created beautifully makes sense of that chaos, showing the worst of us and the best of us. It is specifically a play of contrasts, not just in color but also in feeling: love versus hate, hope versus fear and bitterness, and by the end, violence versus unity. Thankfully, you don’t get a choice in picking the side you want to see. Here, you get the whole story, and you are personally engaged in the stories because of it.

In a setting particularly driven by violence, a ringing feat in the production is Joe Fuselli’s fight choreography. Each step and blow is like a snapshot, frozen in time and burned to memory. As for the performances, to say there is a standout would be a disservice to a remarkable ensemble of 20 performers.

For all of Th’ Burning’s intricacies, there is nothing overly complex about the relationships seen on the stage. They aren’t meant to be. Instead, the events that surround them shape them. We learn about the characters through their intentions and emotions rather than by their direct actions: the world through the innocence of children, the hope and fear in a mother’s heart, and from the preachers, the faith that some strange and wonderful will change.

It’s not surprising how timely the show is in regards to the current conversation on race in America. It’s a reminder that bears repeating of a conflict we are too reluctant, stubborn and fearful to resolve. But Th’ Burning insists on our humanity, our strength, and the need to not only fight for change but to also come together victorious. For all the fear that exists, there is also hope.