Thank You For Staring 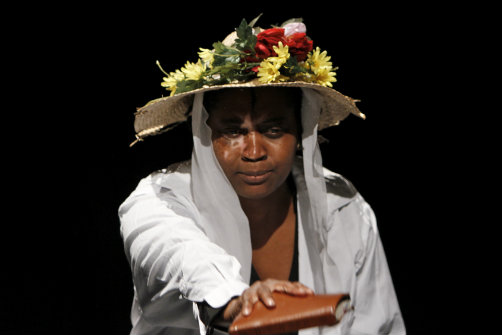 Patrice Gerideau in Thank You For Staring. Photo by Robin Reck.

BOTTOM LINE: A journey of self-discovery with a touch of spiritual preaching.

One of the lessons on which writing teachers seem to agree is that if you want to start writing, write about what you know, write from a place of knowledge. Thank You for Staring is a good example of why said lesson holds water. Patrice Gerideau collects from her heart and her diary pages to compose a solo performance about a young woman who discovers that her skin pigment is disappearing due to an auto-immune disease, and because of it has to deal with prejudice, questions her own identity, and must rise above pre-established beauty standards to perceive her own self-worth.

Divided into five moments—Trying to Find Answers, Family Matters, Losing My Religion, Searching for Love, and Thank You for Staring—that are seamlessly connected by Gerideau’s ease on stage, this solo show begins with several questions being projected on a screen to then show the performer removing her make-up and revealing the depigmentation on her face caused by her vitiligo. With a clear structure that goes from introduction to development to an uplifting conclusion, this show, as willed by the writer, rides a blurred line between theatre that’s intentionally preachy and a motivational sketch through which Gerideau procures to initiate a conversation that, eventually, will enable empowerment and self-acceptance.

With a character born from a patchwork of stories of women with vitiligo, Patrice (Gerideau’s alter-ego) rides a wave that begins with fear, stretches into self-pity and anger towards a white male God, passes through self-doubt and abuse, to finally reach shore as a mature woman with a liberated, renewed spirit and a new passion for life. Aside from the conversations with a typical God that is routinely adored, but frowned upon and denied when he fails to make life pleasing and prosperous, the tone of the rest of the show is delicate and loving, even when exploring the abuse through which Patrice goes through with the first man who crosses her path and utters the word beautiful in connection to her appearance and skin.

Also delicate and careful is the work of director Carol Cadby. With a sensibility to pain and personal suffering, Cadby’s view of Gerideau’s story reminds us that being kind to ourselves in moments of self-doubt can be more healing than the most powerful of medical treatments. Finally, there is Thomas Pflanz’s work on sound and light, which also helps provide a clean look to this moving solo show.