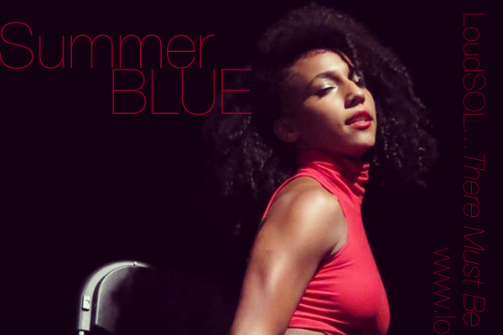 Indulge in a rich deep scene painted by the some of the most talented performers FringeNYC has to offer. “Journey deep and high ­ from the roots to the sky.” Akil Davis opens the show with a great prologue presenting the question, “What is it that makes you die for your art?” The answer, the end result...pain! Davis exults, experience it, laugh at yourself, cry with it, bring it from the soul. Make it so, the pain never looked so good!

Next up, three African American men appear on stage, two seated at a table; the third, standing, begins singing a hymn. The two men seated bang out the tempo with both of their fists on the table. You can’t help but feel the anger and pain from all three.

As the next scene begins, we hear over the speaker a man being interviewed about the great bluesman Robert Johnson, King of the Delta Blues singers. His story ended with Johnson being killed by drinking poisoned whiskey (poisoned because of his philandering ways). At this point a young woman, the dazzling Seanna Sharpe, performs an aerial act on a thick chain: a brilliant representation of being bound by the chains of whatever it is that enslaves you.

The performances in Summer Blue are witty, soulful, and keenly executed. I'm thrilled to have experienced this production.