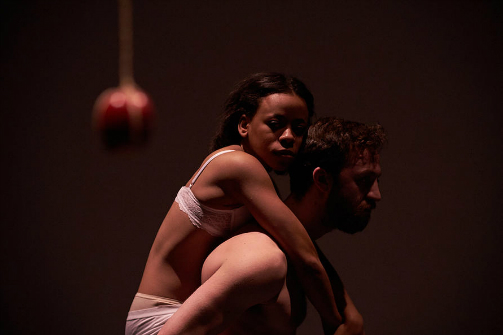 Shani Bekt and Gabe Milligan-Greer in Still Life with Apples.

“I don’t need an analogy for every example, you can just tell me what happened without saying what it was like.”

In the second of several movements of Still Life with Apples, this phrase is repeated amidst a collage of similarly direct and familiar utterances that, together, form a kaleidoscopic view of contemporary relationships and shared existence. Taking a cue from visual art, the dance theater piece from director Sarah Blush and choreographer Ali Perkins (a highlight of FringeNYC 2015), extrapolates from the still life form, and the repeated chorus of, “I don’t need an analogy,” proclaims a central subject of the piece.

Scored in equal parts by Ian Arnold’s delicious electronic compositions and recurring refrains of Doris Day’s “Que Sera,” the production shifts between text and movement, with the intimacy of performance venue the Celebration of Whimsy being used to great effect. A recurring duet, riffing on the playful physicality of couples' home life, is passed from one pairing to another over the performance. We first see it performed in silence, with the clumsiness of flesh-on-floor sounds providing an appropriate aural counterpoint to the cute inelegance of the choreography. When we see the second couple reprising the sequence, this time narrated by one partner speaking each action as a kind of reminder of what came before, the playfulness of the first couple is replaced with the monotony of routine, and through the final two iterations, the movement comes to stand for the slow, subliminal decay relationships so often face.

Perkins’ choreography frequently takes advantage of its relationship to the sounds of bodies, and of the room, with music at times ending before the dance is complete, leaving naked the exhalations of the performers for long periods, and removing the emotional imposition of musical accompaniment. Like the thematic “analogy” phrase, this pairing away pervades the visual structure of the piece, with the six performers beginning in red pea coats and stripping down to various states of underwear throughout the performance. Similarly, the evening begins with a hilariously verbose monologue detailing a chance meeting in a 7-11 (delivered with deft romanticism by Gabe Milligan-Greer) but ends in a slow and wordless physical improvisation. In a response to the request, “Just tell me what happened without saying what it was like,” the performance distills the convoluted over-talking down to a simpler language of movement and contact. In the end, Still Life with Apples gracefully replaces the benign complexities of the hyper-articulate with the beautifully uncomplicated, and at times heartbreaking, gestures of everyday life.