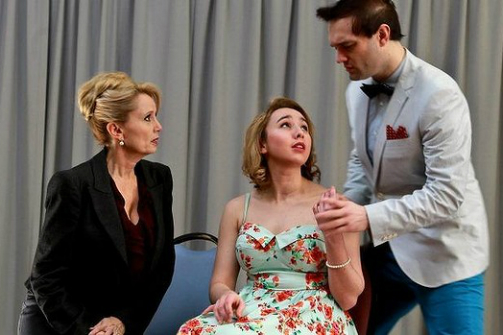 Naturally, the first character introduced in Stalker: The Musical is a stalker. Then comes another stalker, and another, and another, as they prepare for a long night of watching as many women as possible. In this dystopian world, every man is a stalker and every woman knows she is being stalked. The men are entertained and the women like the attention. Men can look, but not touch, and nobody is even aware of the concept of love.

There is one stalker, however, Jay Cloudstreet (Blake Erickson) who only wants to look in one window: Ava's (Tara Martinez). Jay has no interest in spending time watching anyone but Ava, and Ava likes the idea of being more than just a "flavor of the week." When a Stranger (Dave Bleier) comes to town explaining another way of life, Jay and Ava realize that they are in love. The connection between Jay and Ava is not only illegal, but threatens the balance and order of this world.

The first act of Stalker explores these themes very deeply. There are well-written musical numbers (book and lyrics by David Russell and Alex Giles, and music by Andy Peterson) celebrating the discovery of love, as well as cautionary numbers describing love as a "four letter word." As an increasing amount of residents learn of love, The Stranger, as well as the leaders in the town, gravely warn everyone that love is nothing but a moment—one that cannot last.

Stalker's best and brightest moments are in the second act. The simplistic themes from the dystopian world are applied to problems that feel all-too-real, as Jay and Ava are transported to New York City. The second act contains heartbreakingly realistic challenges, but also some of the funniest moments.

Even though Jay and Ava are arguably the main focus of the story, Stalker also features numerous other types of relationships and outlooks on love. I found the diverse pairings and personalities to be very relatable.

Stalker: The Musical is the only Australian offering in this year's New York International Fringe Festival. The cast consists of seasoned actors as well as promising newcomers—from Australia and New York City—who give very strong performances.