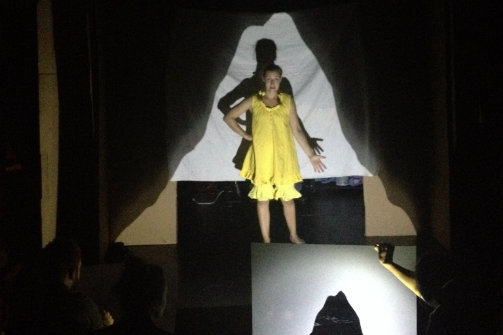 Anya Gibian in Solina. Photo courtesy of Little Did Productions.

You never know where a journey will take you. But when that journey is filled with singing wolves, a band of talented musicians, and a confident, take-no-prisoners heroine, you are sure to have a great deal of fun along the way. In Little Did Productions’ Solina, a musical coming-of-age fable comes to life with the help of splashy practical effects.

Solina (Anya Gibian) lives an idyllic life on her parents’ farm. But when she awakes one morning to discover that the sun is no longer shining, her world is thrown into chaos. She consults a wise rooster (Nathanial Moore) and sets off on a journey to rescue her dear Sun from whatever might have taken him away. Through mountains, deserts, and interactions with a wide variety of animals and celestial objects, she perseveres until light returns to Earth, and she earns a place in the night sky as Polaris, the North Star.

Little Did Productions takes a risk by adding what might be dismissed as “children’s theater” into the already-competitive listings of the New York Fringe. But the company refutes that label by creating a piece that doesn’t split its time between the kids and the adults. Everything is for everyone. The company’s puppets are jaw-dropping, and accompany actors in a way that doesn’t fade them into the background, but draws even the grumpiest theatergoer into their joyful fantasy.

The impressive puppetry is matched by the company’s multi-instrumental performance. Led by musical director Luke Santy, each person on stage contributes to a soundtrack drawn in equal part from children’s books as from the work of bands like the Decemberists. Sara Jane Munford gives a standout vocal performance as the Moon (a giant, black-light activated orb with a moving mouth, no less), and the company’s skill on instruments ranging from the cello to the toy piano adds to the piece’s earnest, DIY texture.

Admittedly, Solina’s delivery feels much more sophisticated than its content. The show’s language and Kara Walker-esque narrative shadow puppets are exceedingly well crafted, but seem like an inefficient vehicle for delivering the show’s well-worn “finding-your-purpose” story. Similarly, a mid-show electronic music sequence displays the virtuosity of the pit, but ultimately comes off as bizarrely self-indulgent.

Yet after all is said and done, Solina is sure to be remembered as one of the most ambitious and thoughtfully constructed offerings at Fringe 2015. Boasting a hummable soundtrack, solid stagecraft, and optimistic message, Little Did Productions makes work that capitalizes on the pleasures of a theatre geared towards children without making their audience (regardless of age) feel childish.