Sleep at Your Own Risk 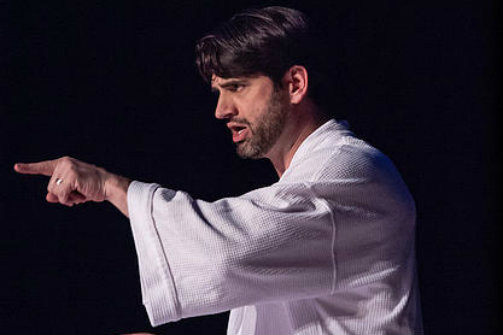 Brendan Wahlers in Sleep at Your Own Risk.

I went in to Sleep at Your Own Risk expecting a light hour of theatre. After all, the topic of sleepwalking has been covered in a comedic way in Mike Birbiglia’s successful show Sleep Walk With Me. Although the first moments of the play provide some awkward titters as actor Brendan Wahlers begins to disrobe, a vast majority of the tale is quite bleak.

Wahlers's character in this one-man show—referred to in the program only as “Actor”—is struggling with a severe case of sleepwalking. While he finds many of the actions that he performs while walking in his sleep merely embarrassing, such as urinating on a printer or eating copious amounts of ice cream, he begins to take his disorder more seriously when he finds that his actions are not limited to trivial moments of slumber-induced quirk. The Actor has begun to assault his husband Daniel in his sleep, frequently hitting Daniel and going so far as to attempt to choke him. The Actor becomes obsessed with the idea that he will accidentally murder his husband and, driven by his frequently professed deep love for Daniel, he eventually seeks treatment for his condition.

Though the play is billed as “a one-man comedy,” the cloud of The Actor’s depression, anxiety, and various other neuroses absolutely smother any attempts at comedy. A description of the breakdowns he has while attempting to communicate with medical personnel, or the scorching and deeply painful embarrassment he feels while cleaning urine off of his printer, absolutely suffocates the moments that may be perceived as humorous, ones that might have been included to contrast with the heavy topic.

Sleep at Your Own Risk gives insight into the potentially serious emotional repercussions of suffering from a severe sleep disorder and makes for a somewhat interesting hour of theatre due to this unconventional perspective.