Ripple of Hope: One Teacher's Journey to Make an Impact 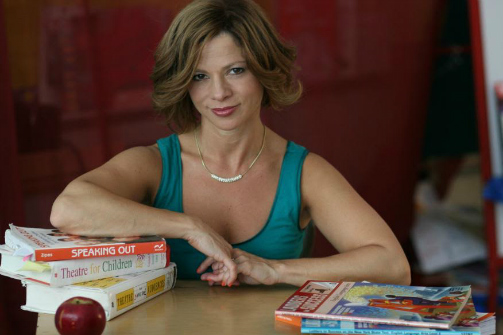 Karen Sklaire in Ripple of Hope. Photo by Spencer Moses.

BOTTOM LINE: An engaging and charismatically acted narrative that only manages to scratch the surface of the complex issues that plague our education system.

The hour and fifteen minute long production of Ripple of Hope absolutely flies by. Disillusioned by the business of chasing her dreams to Broadway, Karen Sklaire, who serves as both writer and performer, tells us of her transition from Broadway hopeful to New York City public school teacher. Much of her story will be familiar to anyone who has ever stepped in front of a classroom and the rest will be familiar to anyone who has followed the politics of NYC public education.

Fresh out of graduate school and armed with stereotypes reinforced by two of her favorite movies—Freedom Writers and Dangerous Minds—Sklaire enters the classroom hoping to be a “ripple of hope” for her students. Her initial interaction with her students is naïve, when they don’t immediately take to her she shouts, “Everyone’s supposed to love the drama teacher! Drama is fun!” Eventually she manages to forge connections, but stumbles on other hurdles: she finds administrators who undervalue arts education; she discovers one of the major plagues of the school system, the insanely high turnover rate of outstanding administrators; she spends some time in NYC’s infamous rubber room; and eventually finds her way into a school that values her as an educator and allows her to be “the ripple of hope” she had envisioned.

Sklaire is a winning storyteller and it’s hard not to be taken in as she narrates her journey. The audience, which according to a show of hands was composed primarily of teachers, was at turns audibly amused and appropriately empathetic. I myself can relate to Sklaire’s circumstances. I too moved to NYC for a theater career and happily ended up a public school teacher instead. I chuckled knowingly at the anecdotes of new teacher struggles, nodded to myself at the frustrations of administrative turnover and was unabashedly teary eyed as Sklaire described the occasional success of her students.

Despite my emotional reaction, Ripple of Hope left me feeling frustrated. On one level, Sklaire’s play is great theater. It has a solid story line, likable characters and clear direction. But like teaching, theater is inherently political, and as such I can’t help but feel that by choosing to tell this particular story, Sklaire is doing her audience a disservice focusing on a story about a privileged outsider who attempts to swoop in and use bright eyes and optimism to change the life of children. Ripple of Hope does not fully explore the attributes of education that deserve more attention: the society that creates children who appear unreachable, the system that drives out talented administrators, the mandatory curricula that do not allow our kids to explore or create, and above all the tragic, tragic reality that the school system is failing an unfathomable number of our kids. While Sklaire dabbles lightly on each of these, at the end of the day, Ripple of Hope touts the message that the system is failing our teachers, and that is only a small drop in a very large bucket.

Sklaire is a talented writer and a moving performer, and her show certainly is thought provoking. Despite some thematic frustrations it is well worth the viewer's time.